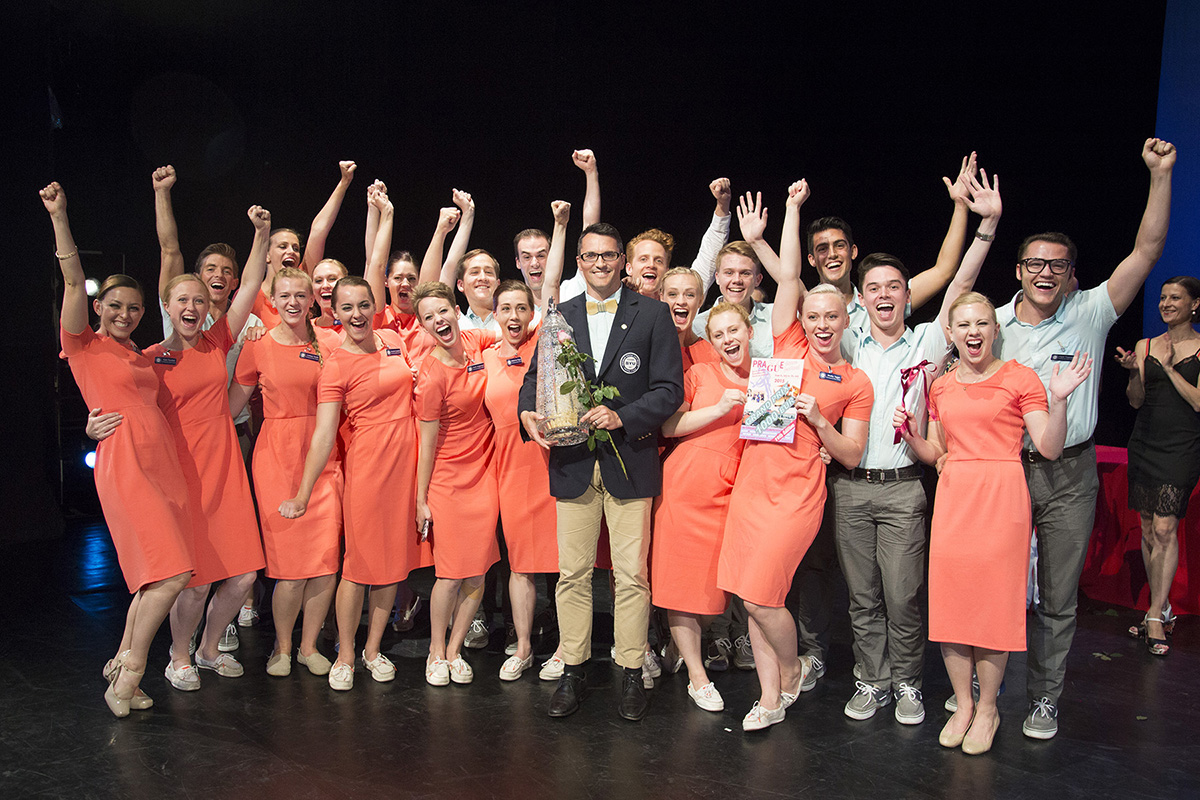 Contemporary Dance Theatre (CDT)  started off the week with classes from Prague’s famed St. Charles University professors in ballet, modern and hip hop.  On Monday evening CDT ignited the festival audience with their performance at the National Theatre’s New Stage. <p style="text-align: justify;">Tuesday brought more workshops and more strong performances from the BYU students.  Members of CDT had a wonderful time creating friendships with fellow festival performers and teachers from 14 other countries including Japan, South Africa, Malta, Panama, India, Belgium, Poland, Hong Kong, and Israel.</p> On Wednesday, festival guides led the group in touring the picturesque city of Prague. The students were treated to a visit of the largest ancient castle still in use, the Prague Castle. They were amazed at the scenic views from King’s Hill and St. Charles Bridge. Touring Lesser Quarters brought other treats such as tasty gelato and pork knuckle. The festival also treated the group to a tour of a crystal factory and dinner aboard a Vltava River boat cruiser. Thursday brought one of the most exciting events of the tour to this point. CDT finished its final performance and was awarded the festival's overall top champion award - the Grand Prix Award - for the Festival’s best performing group.  The ever-gracious BYU students celebrated the win by congratulating the other groups on their accomplishments and attending an awards party at a palace. At this party the head jurist for the festival told the CDT director and students that the jury knew from the very first BYU performance that they would win the festival. She continued by saying that they were thrilled to see a university group with such a high level of professionalism. <h6>...jury knew from the very first performance of the BYU dancers that they would win the festival.</h6> Budapest was the next stop on the group’s itinerary. After a long day of travel, the group spent a short time scouring the markets for gifts and souvenirs, and then ate dinner with the local LDS Young Single Adults. Saturday brought a tour of Parliament and the House of Terror, a museum witnessing the atrocities of the Nazi and Russian Communist occupations. The group made preparations for the Saturday evening show and were thrilled to see many missionaries, investigators and the mission president’s family at their performance in the Bakelit Multi Art Center. The generosity of the local saints was again felt on Sunday as the group attended church at the International Ward.  In the afternoon CDT offered a devotional with musical highlights and talks from the dancers for the stake. Afterwards, the group ate dinner with President Szabadkai, the first Hungarian mission president presiding over a Hungarian mission. The group was treated to authentic Hungarian dishes and wonderful hospitality. The group is excited for their upcoming visits to Bratislava, Vienna and Wurzburg as they begin to wind down their European travels. 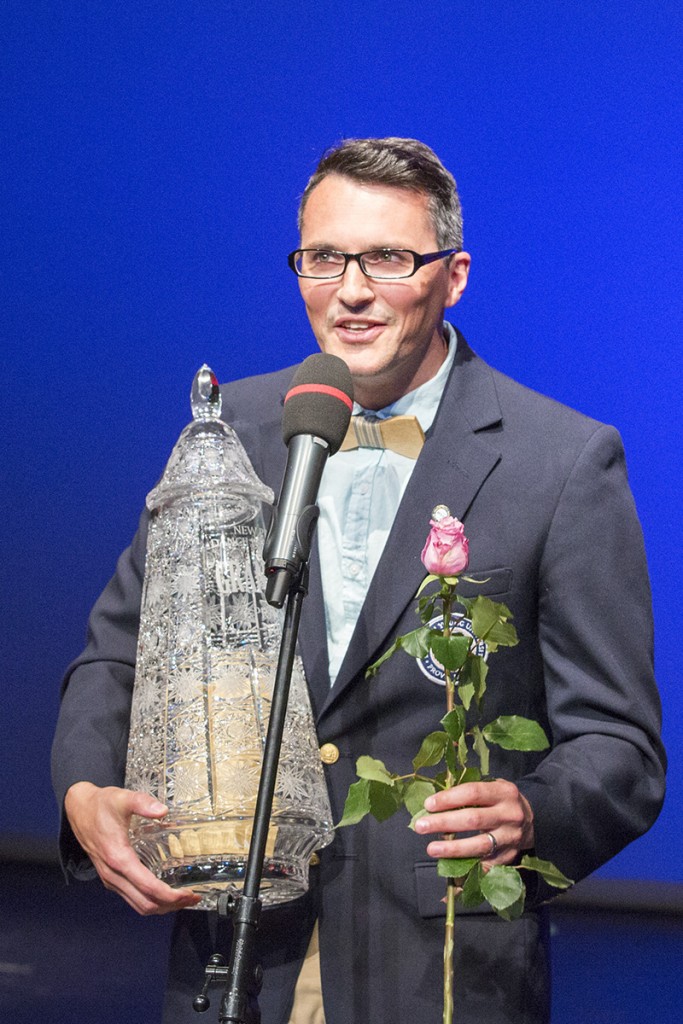 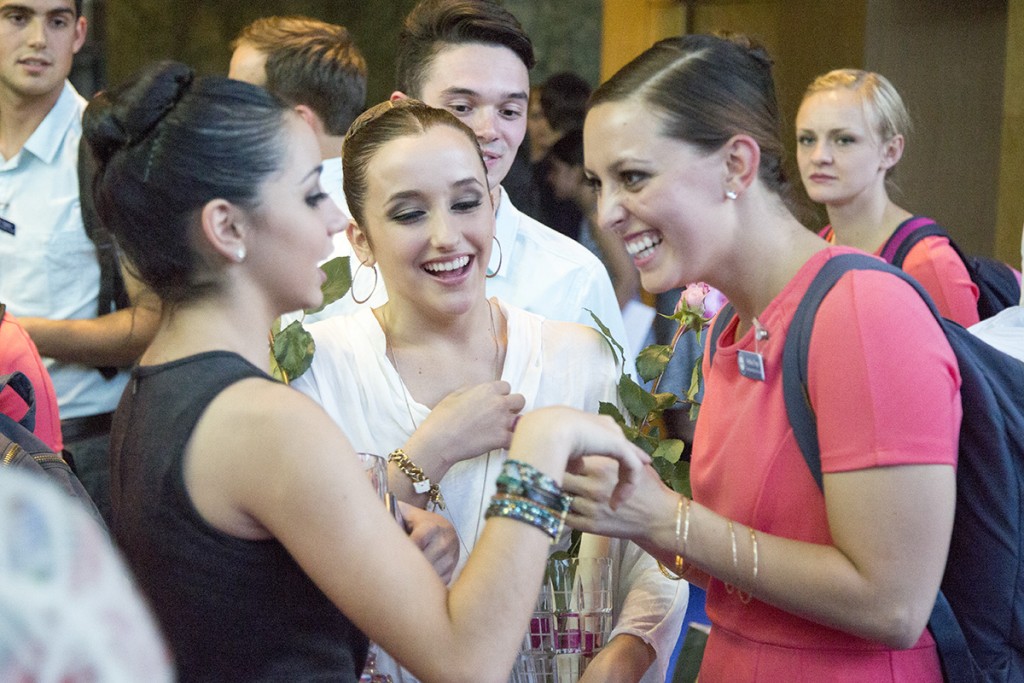 Ashley Page talks to her new friends at the New Prague Dance Festival. 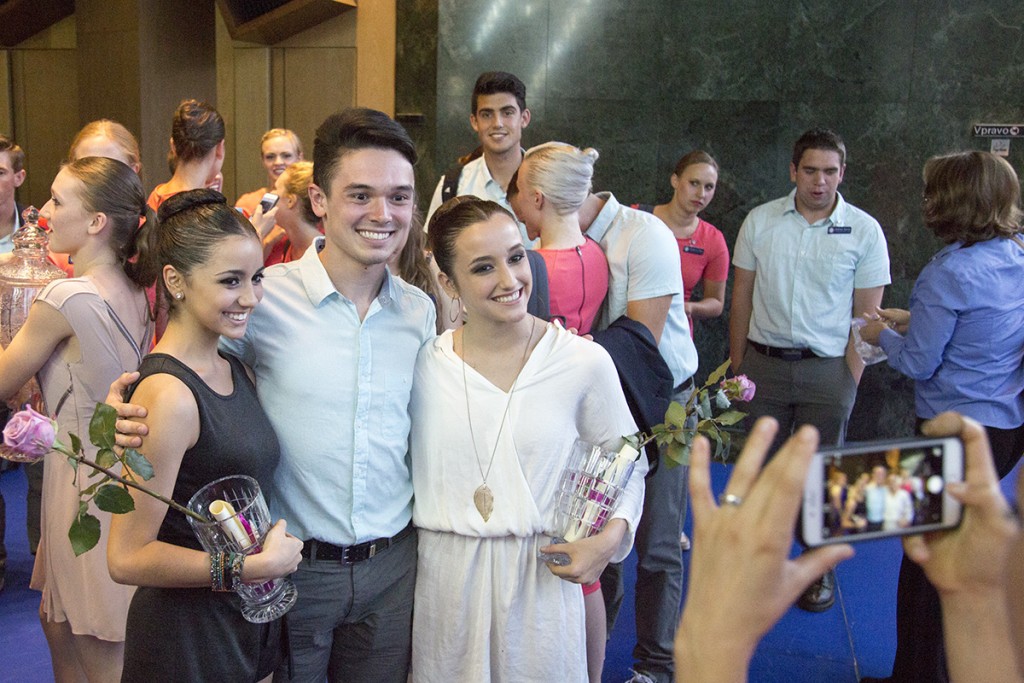 Logan McGill takes a photo with his new friends at the New Prague Dance Festival. 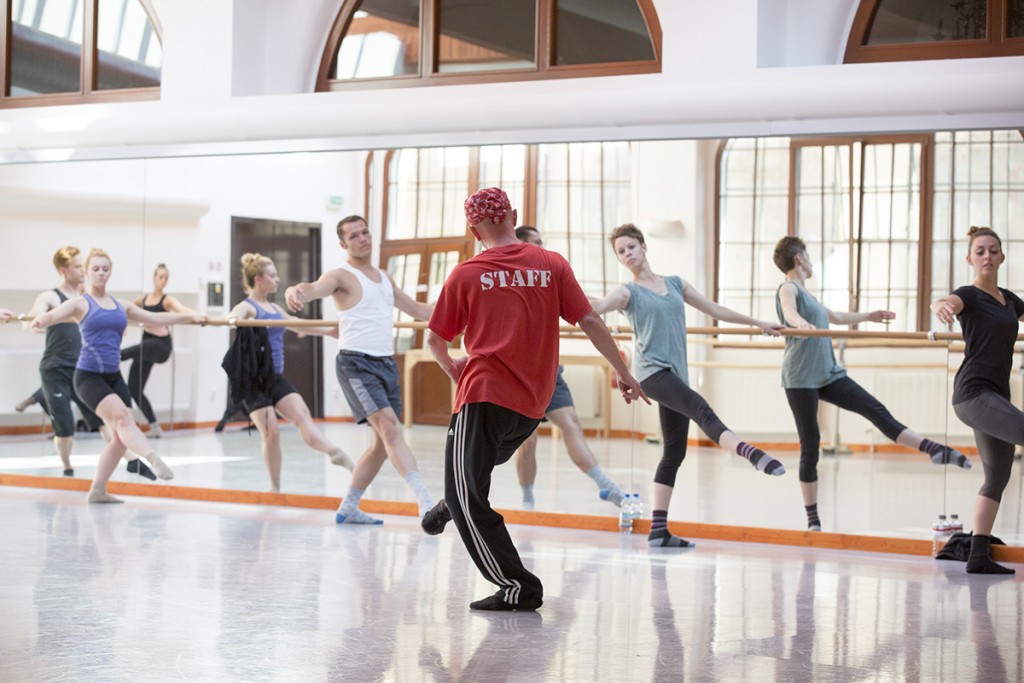 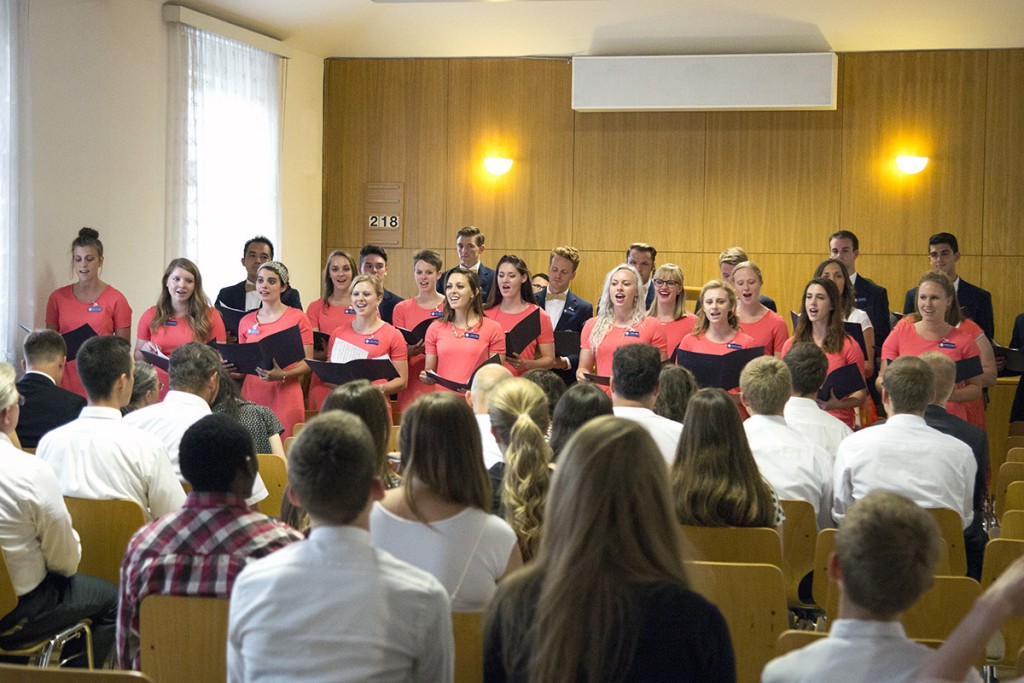 Members of Contemporary Dance Theatre giving a devotional in Prague 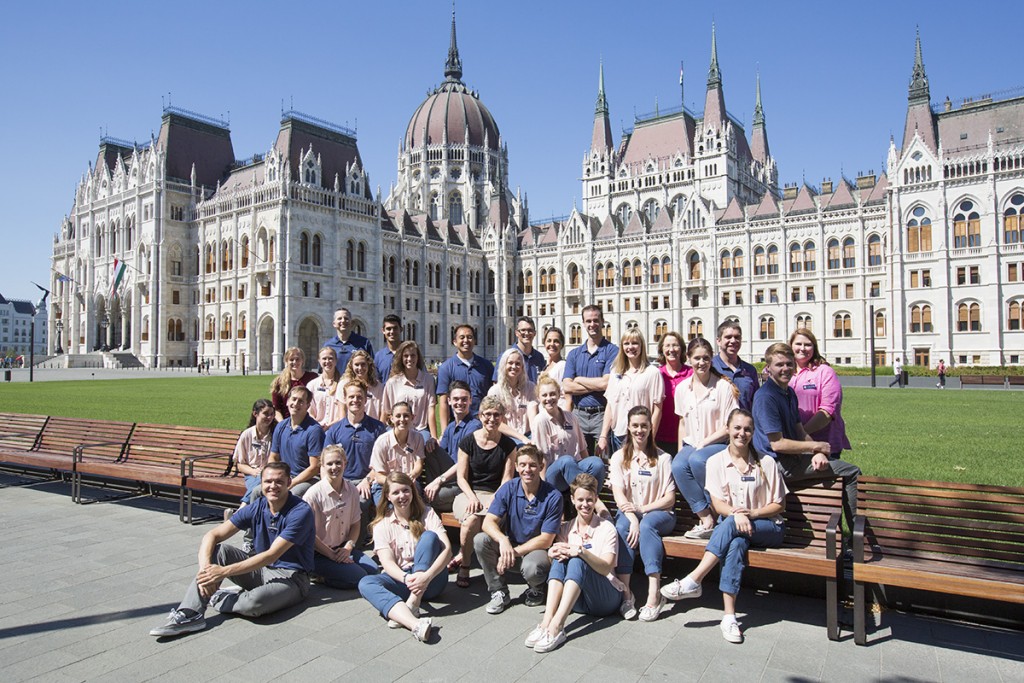 Members of Contemporary Dance Theatre take a group shot in front of the Budapest Parliament Building. 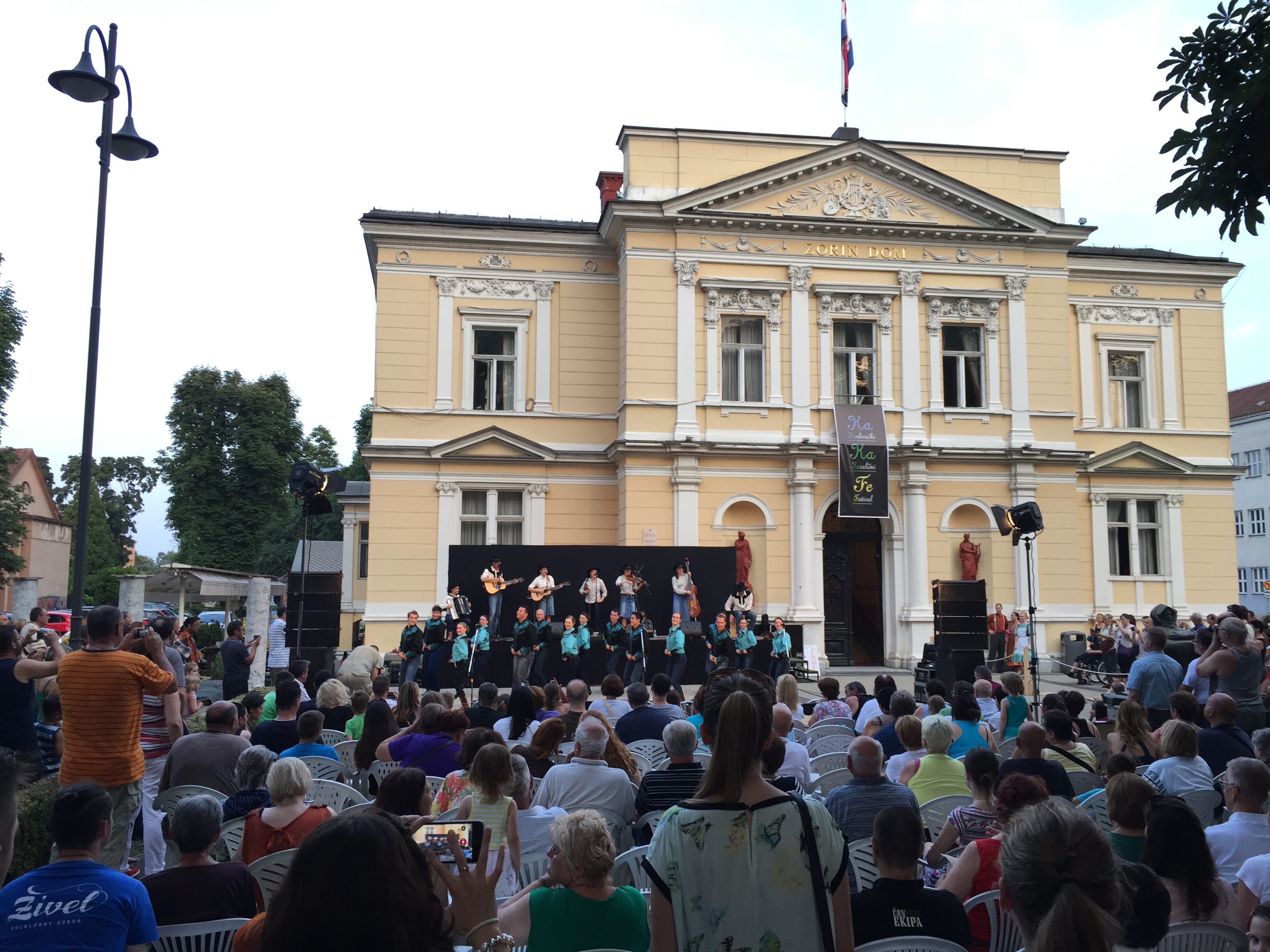 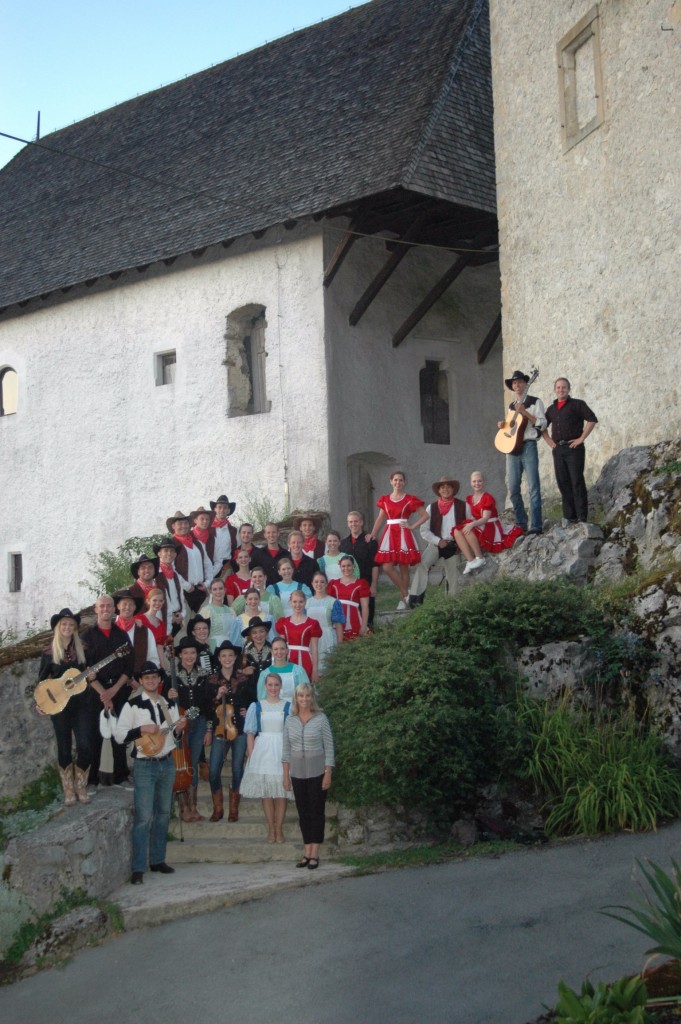 The American Folk Dance Ensemble standing in front of Ozalj Castle, where they performed in the courtyard. 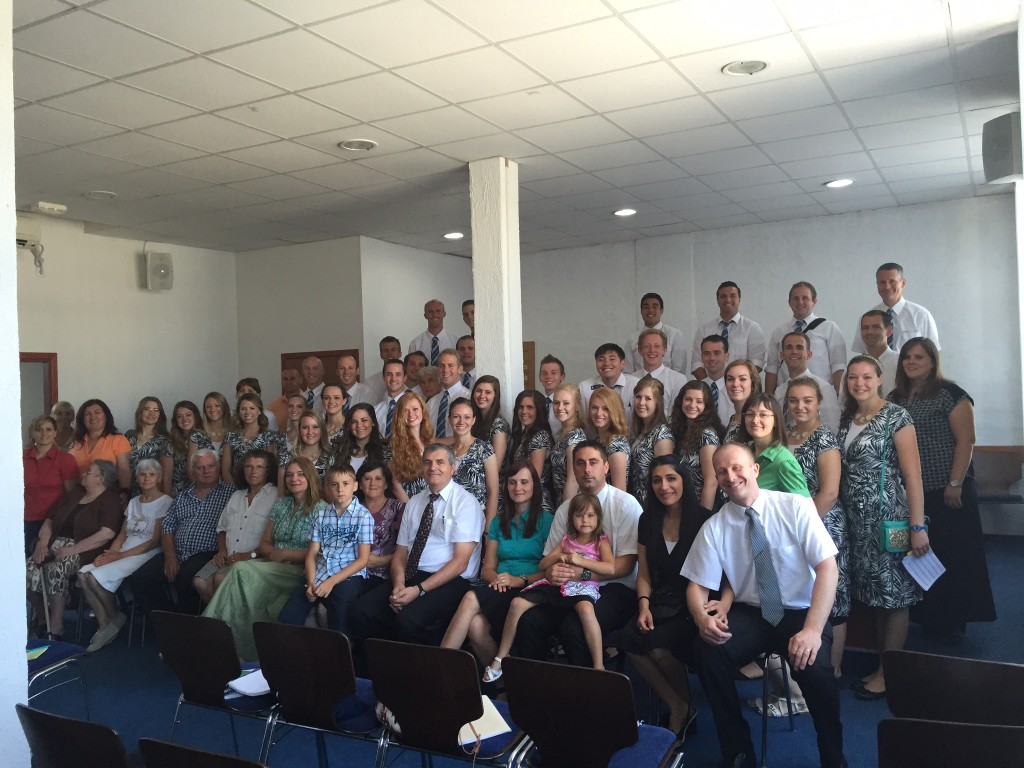 Friends in the Karlovac Branch request a photo with the folk dancers. 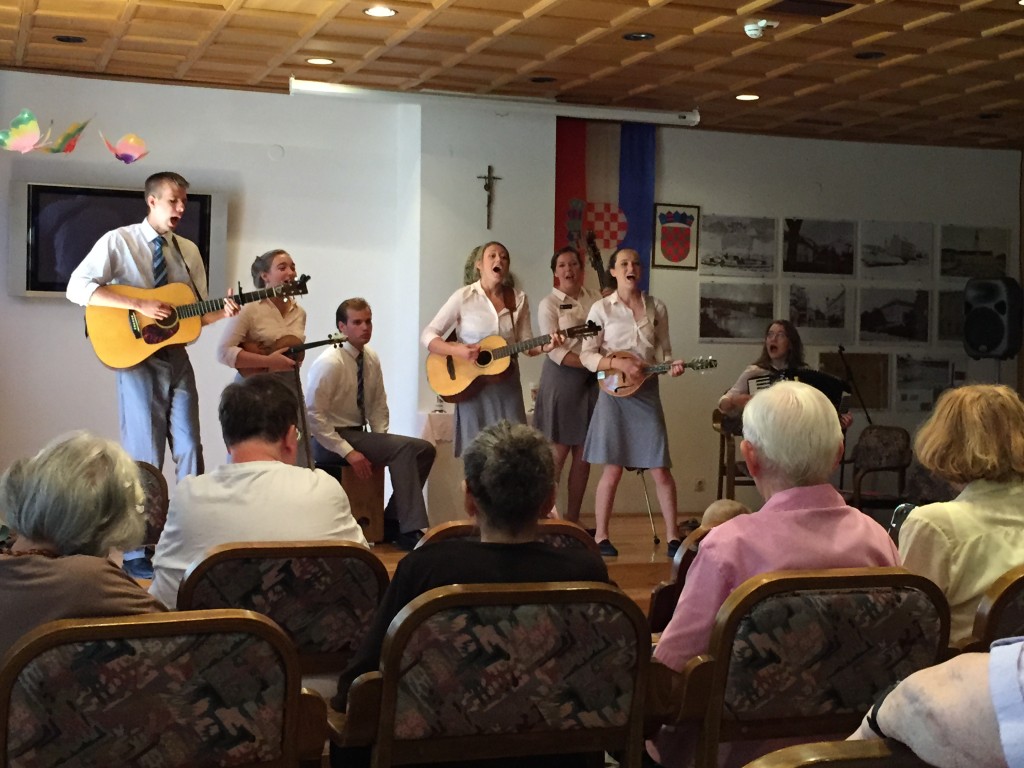 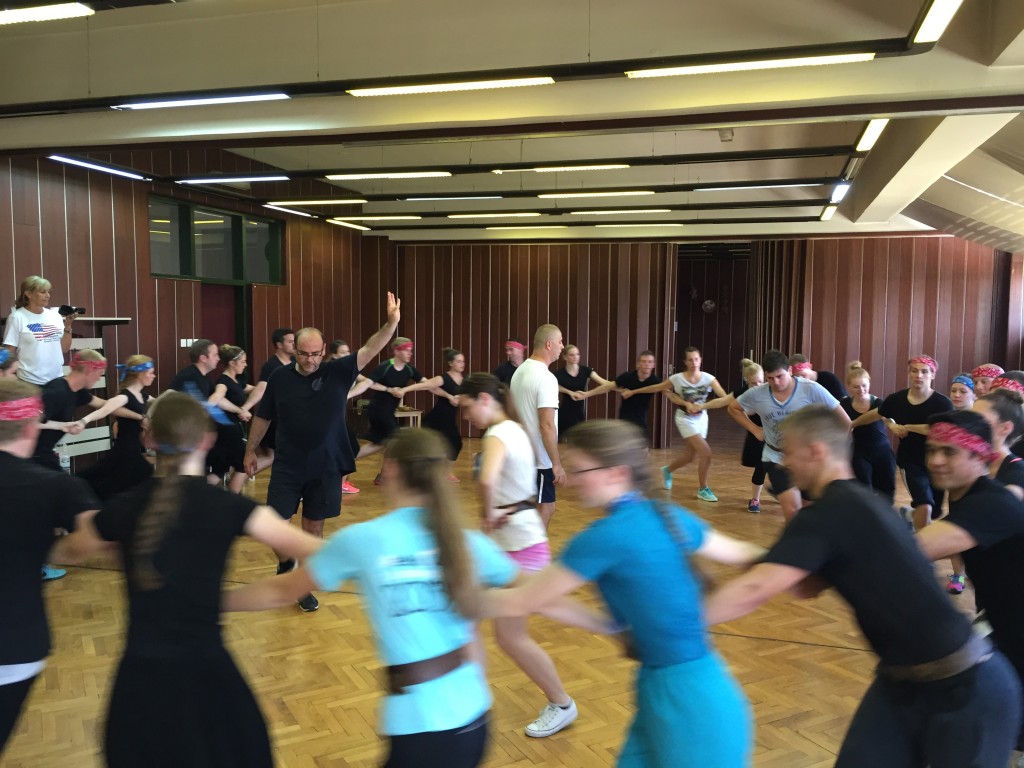 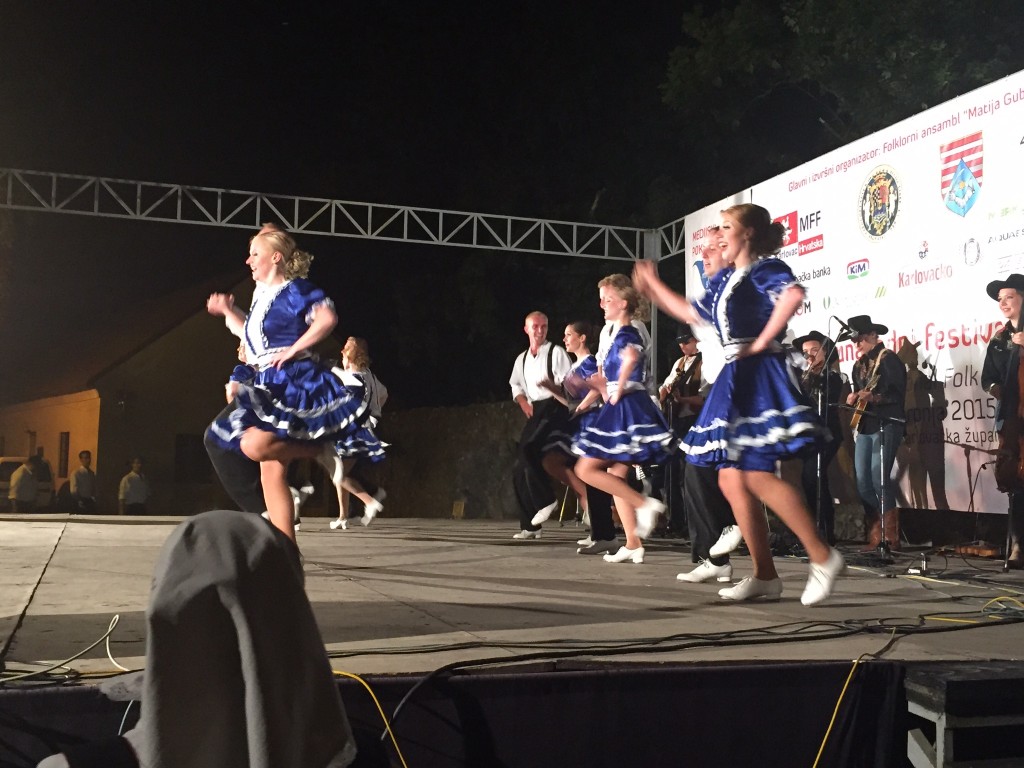 The American Folk Dance Ensemble performs in different locations throughout the week, including an outdoor stage in Ogulin. 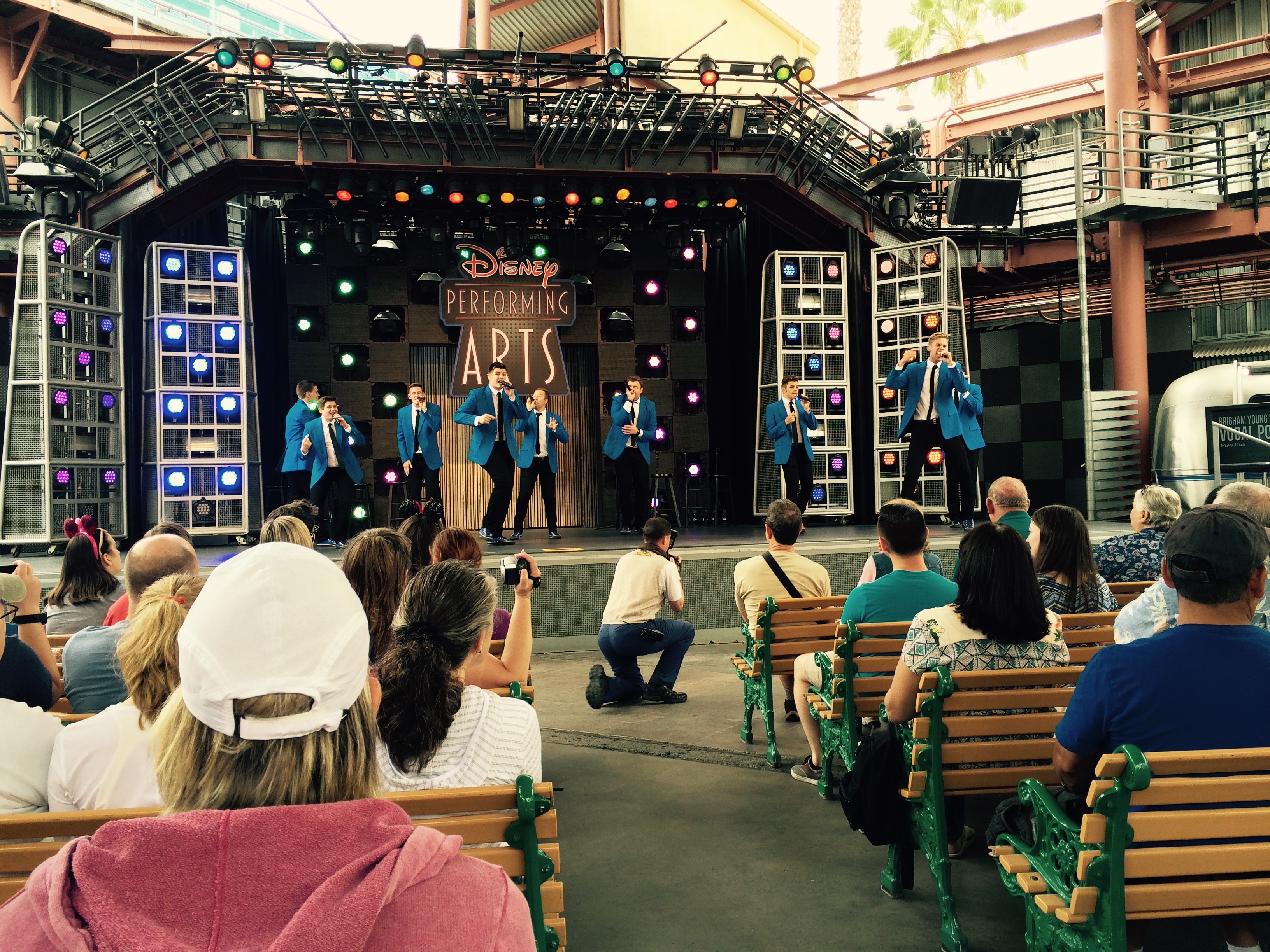 Vocal Point Disney Tour Vocal Point accepted a unique invitation from Disneyland to travel to Anaheim for performances, workshops for Disney cast members, and special meetings with Disney executives. The four park performances were given at the Hollywood Backlot Stage in the California Adventure Park –and were very well received. The “Cast Conservatory” workshops occurred behind the scenes in a cast member only area of the park, and were focused on teaching what contemporary a cappella music is all about. <h6>“To see the inside of a company like Disney, which has high values and excellence, has been marvelous!”</h6> The special meetings included time with (among others) Bruce Healey, Disney Resort Music Producer, TC Knoch, Manager of Disney’s Relationship Marketing, and a journey north to the Disney Animation Studios in Glendale. There the group enjoyed four hours with Jay Stutler, Music Producer of Disney TV Animations and his team. Here hands-on experience with music creation, combination with animation, and work with key casting of the right voices proved to be an exceptional educational experience. And reactions? From the students: “This has been an amazing experience to see the inner workings of a major corporation involving its music operations.” “To see the inside of a company like Disney, which has high values and excellence, has been marvelous!” Ashna Horman, Entertainment Manager-Guest Talent Programs at Disney said, “You are just tremendous! This has been just what we wanted when we invited you here."  "Thank you for partnering with us. You have provided an amazing opportunity for our cast members. "  Max Gentzler, Guest Talent Lead commented, “Keep doing what you are doing. Each good thing you do is like the tick of a clock, toward doing good in the world.” The week has been filled with great experiences and opportunities. 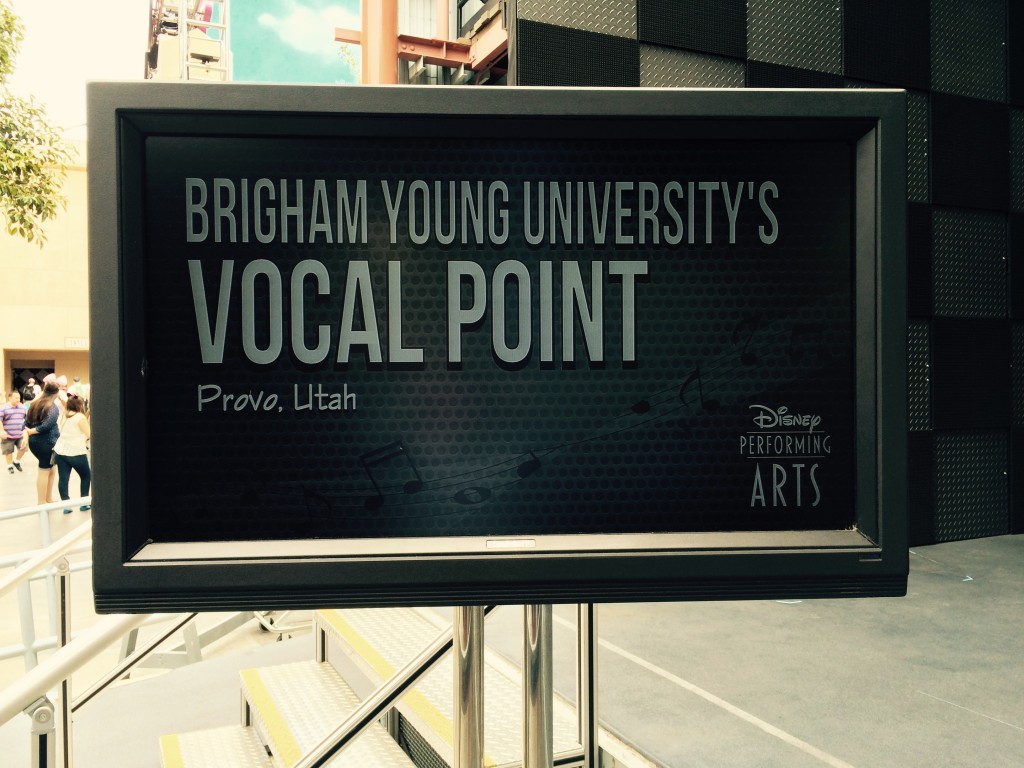 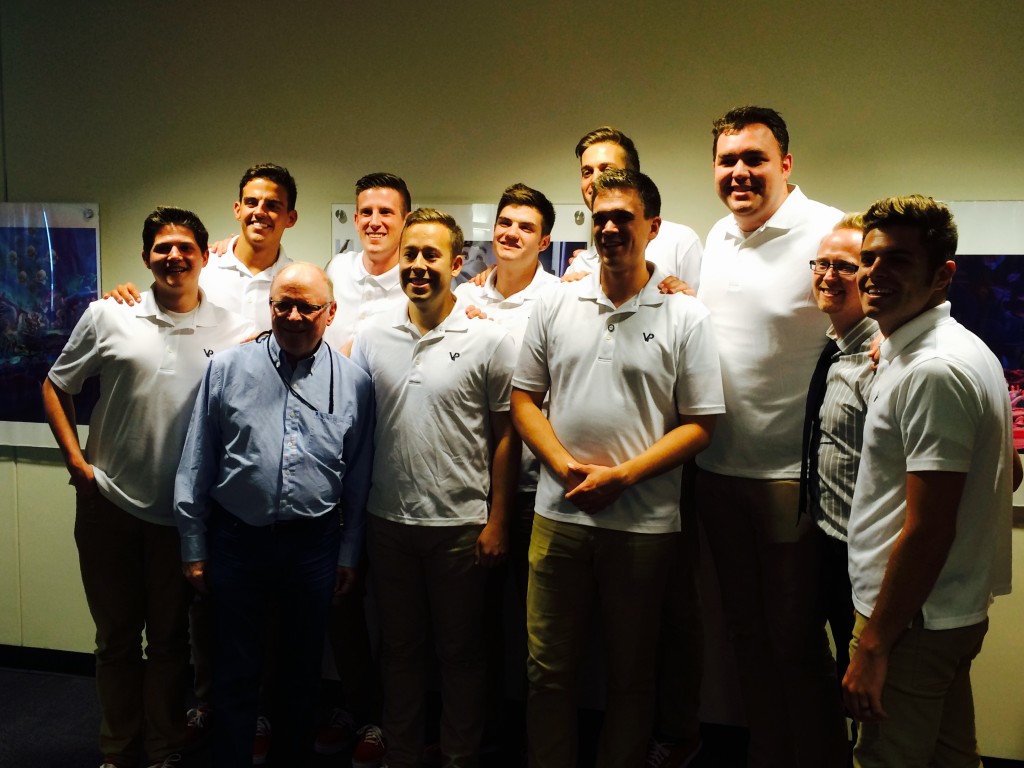 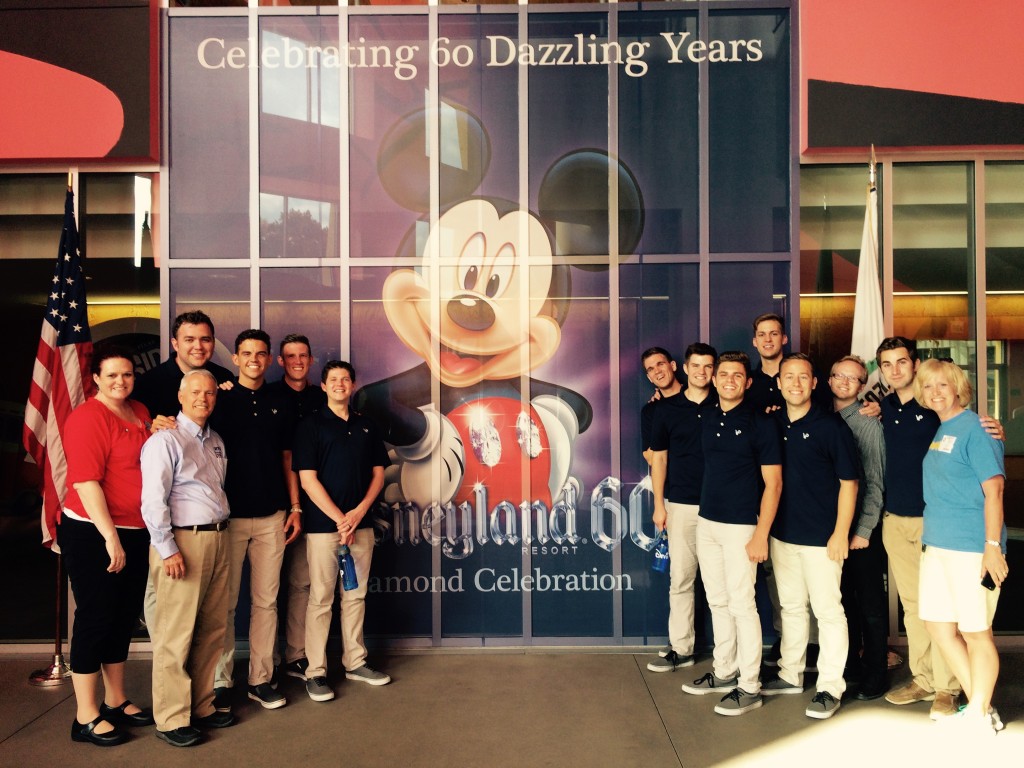 Disneyland celebrates its 60th Anniversary this year, and hosted Vocal Point during this past week. 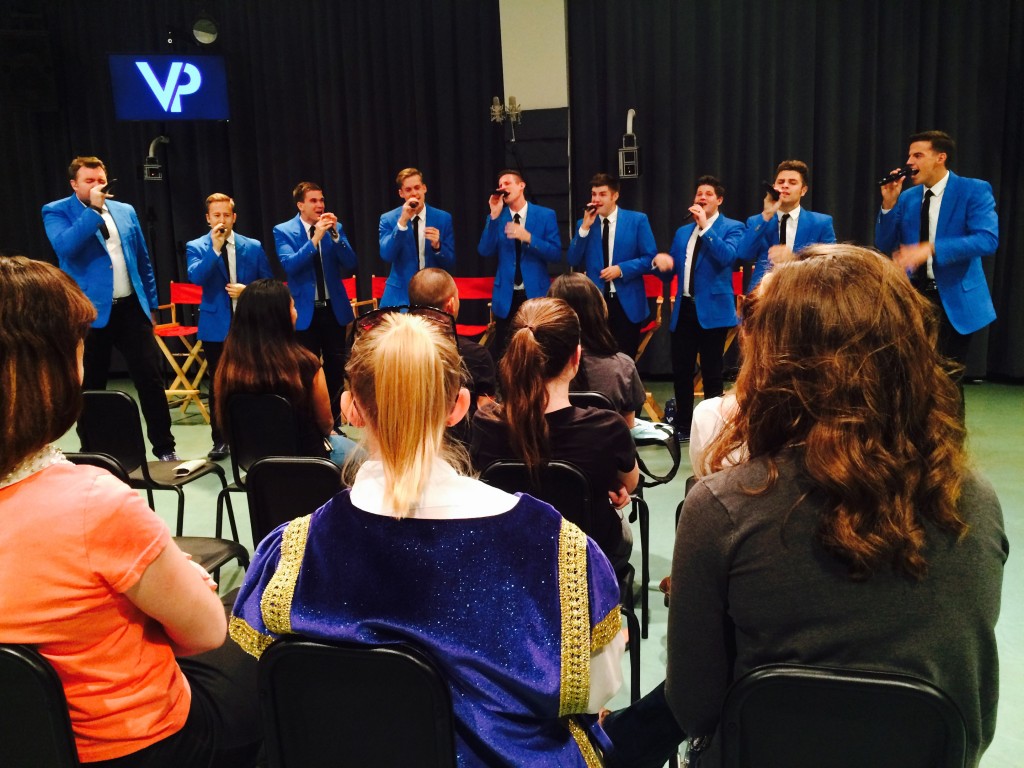 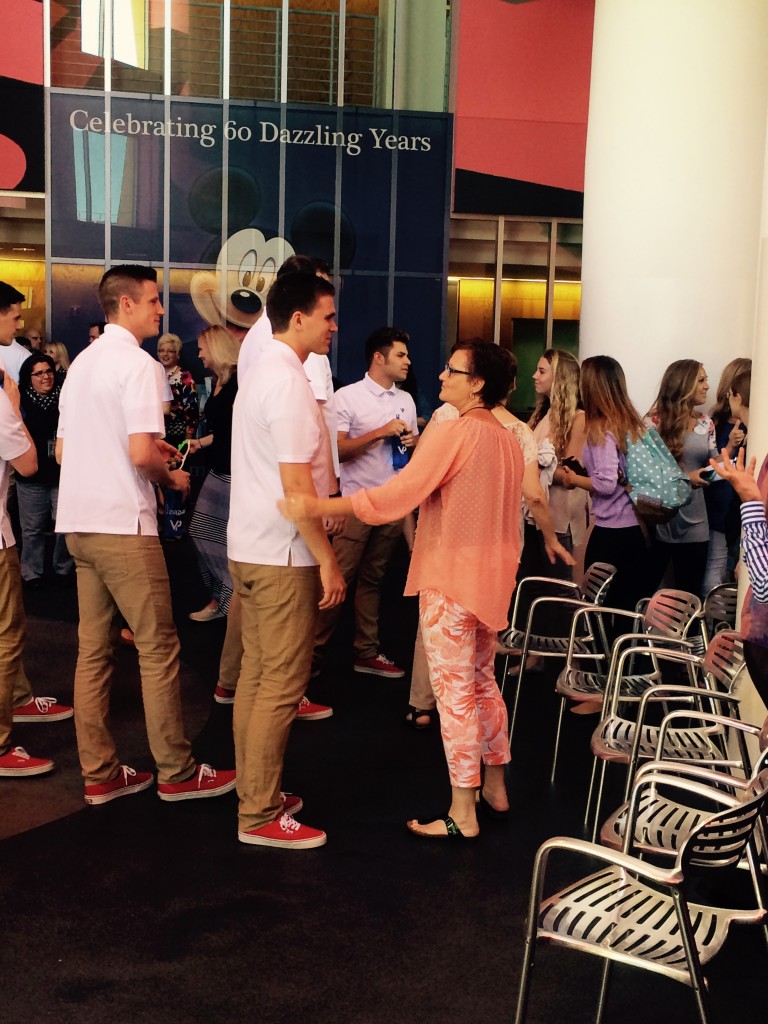 An additional special performance was given for all Disney employees in the Music Department building - here the group greets the audience afterward. 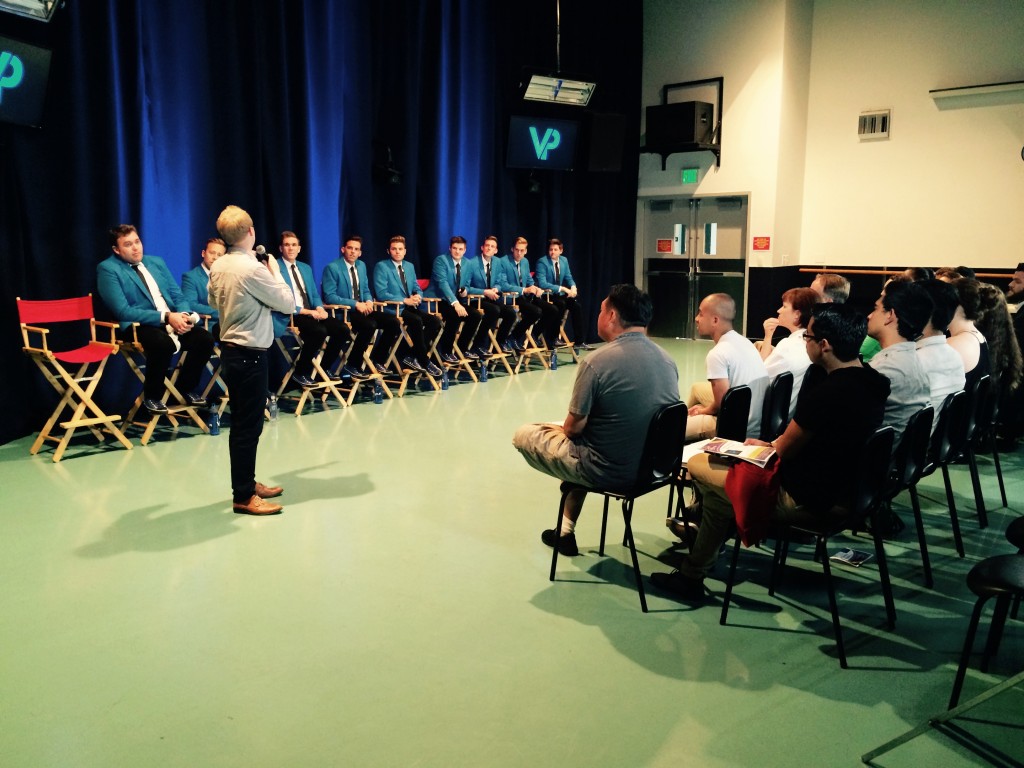