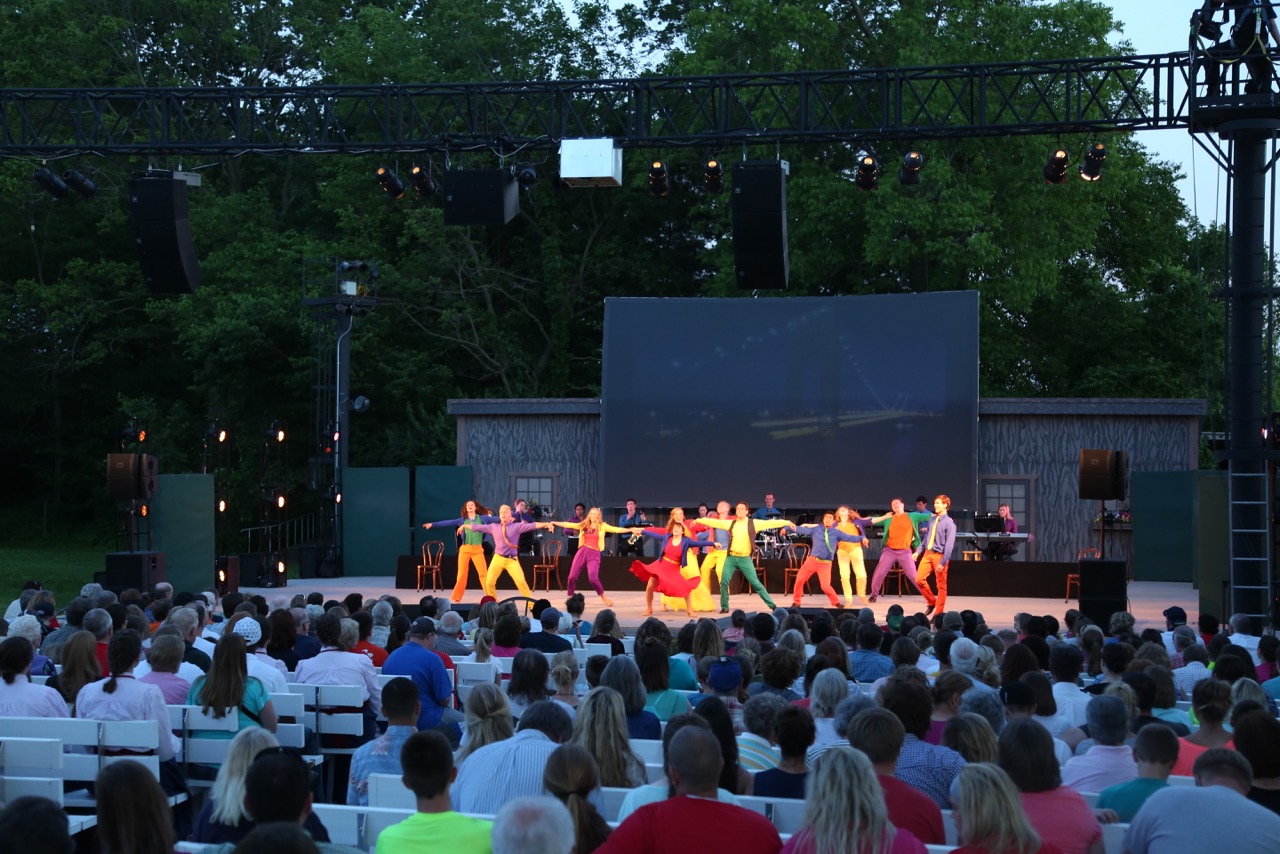 On Sunday evening, the Young Ambassadors presented their last devotional for this season.  Due to some problems with the thunderstorm that evening in Nauvoo, the air conditioning was not working in the chapel.  In spite of the heat, those in attendance felt a powerful spirit as the Young Ambassadors sang and spoke of Jesus Christ in their devotional entitled “I Feel My Savior’s Love”. Monday was a day to enjoy much of what old Nauvoo has to offer.  The group started out the morning with a handcart trek.  After pushing and pulling handcarts through the mud, they attended two shows presented by the Young Performing Missionaries.  “Just Plain Anna Amanda” and “Sunset by the Mississippi” both provided insights into life in Nauvoo when the early saints were living there.  The Young Ambassador show that night enjoyed perfect weather.   Audiences at the Nauvoo Outdoor Stage have included appreciative Nauvoo residents, visitors from surrounding communities, LDS visitors from all over the world, and missionaries from far and wide who have been called to serve in Nauvoo. Tuesday was the day to cross the mighty Mississippi to visit Keokuk.  They gave a performance in Rand Park with the mayor in attendance.  Afterwards, the Young Ambassadors joined the local sisters in gardening, and painting the ceiling of a pavilion in the park.  That evening, back in Nauvoo, the show was fun as busloads of youth conference participants pulled up to the outdoor stage just before they were scheduled to begin. <h6>Audiences at the Nauvoo Outdoor Stage have included appreciative Nauvoo residents, visitors from surrounding communities, LDS visitors from all over the world, and missionaries from far and wide who have been called to serve in Nauvoo.</h6> On Wednesday, many Young Ambassadors started their day off early at the Nauvoo Temple at 7 a.m.  After the temple, an hour drive to the university town of Macomb, Illinois, took the Young Ambassadors to Chandler Park for a picnic performance.  Citizens of Macomb sat under the trees on lawn chairs and at picnic tables.  The park was beautifully shaded and a lovely breeze made the setting for this performance one of the favorites of the tour.  Small children were particularly enamored with these BYU students and their songs of love.  The evening performance back on the Nauvoo Outdoor Stage was shortened because of weather storm warnings.  The Young Ambassadors hurried down to Parley Street to experience the Trail of Hope.  Young Performing Missionaries stood along the trail and recounted the words and journal entries of Nauvoo’s faithful, early saints.  Lightning was encircling us as they listened to their stories.  The group ended the day singing “How Great Thou Art”, arm in arm, on the banks of the mighty Mississippi River. Thursday the weather was stormy enough that the show was moved indoors. The audience response was very enthusiastic as they enjoyed the performance in air-conditioned comfort. Friday, Public Affairs organized a service project to assist the Burlington, Iowa Downtown Partners in beautifying their downtown area.  They painted large flower pots, and then participated in a walking tour of the city ending with a stroll down Snake Alley, a street patterned after San Francisco’s Lombard Street.  After the city tour, they performed in the recently restored Capitol Theatre.  It was a beautiful venue and the community residents came out in large numbers to enjoy the noon time performance. Saturday’s outreach activity took the group to Quincy, Illinois where the group participated in a service project clearing the Spring Valley Trails at John Wood Community College.  As they were oriented to the projects planned, one of the senior sisters talked about paying back the good people of Quincy for the hospitality and kindness extended to the early saints when they were driven from Nauvoo.   For three hours they were bridge builders, weed whackers, tree and bush trimmers, trail sign painters, mulch movers…they did it all.  It was delightful working alongside other volunteers as they finished a bridge that had been in the works for five years.  After their work, they met at the college baseball field for lunch where the college president spoke to the group.  After lunch, they drove to the Quincy Mall for a show.  Once back in Nauvoo, the group stopped by the Visitors' Center where a special performance of Carthage’s “Be Still” presentation was performed for them. Sunday morning after church meetings, the group met in the west theatre of the Visitors' Center for one final devotional together before driving to the airport and back to life at home.  Nauvoo was life-changing for each Young Ambassador as well as for many new friends they met in the numerous performances and service activities of the tour.  The Young Ambassadors are already asking the question:  “When can we come back to Nauvoo?” 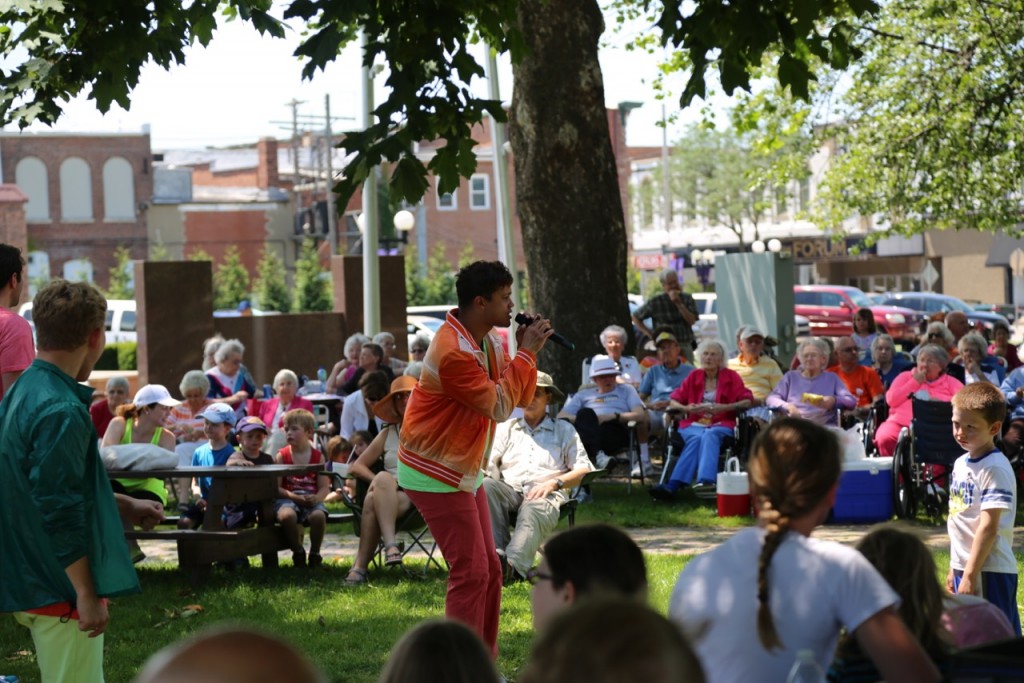 Elijah Thomas solos during an outreach performance in Macomb, IL 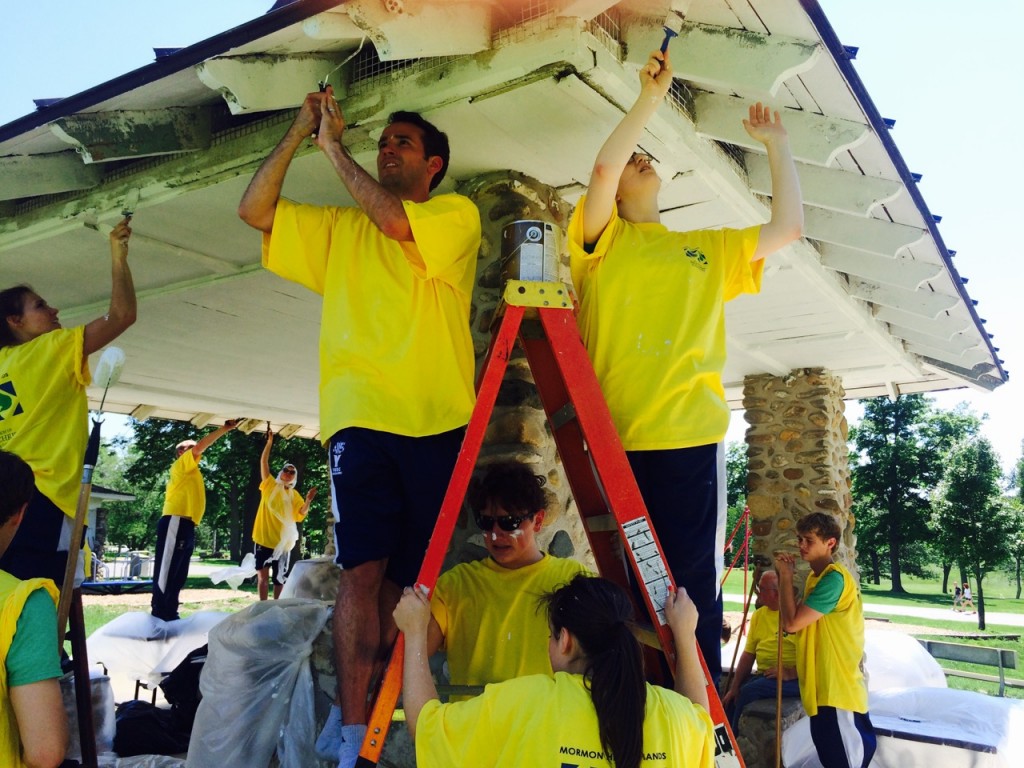 Rand Park Pavilion in Keokuk, Iowa gets a facelift 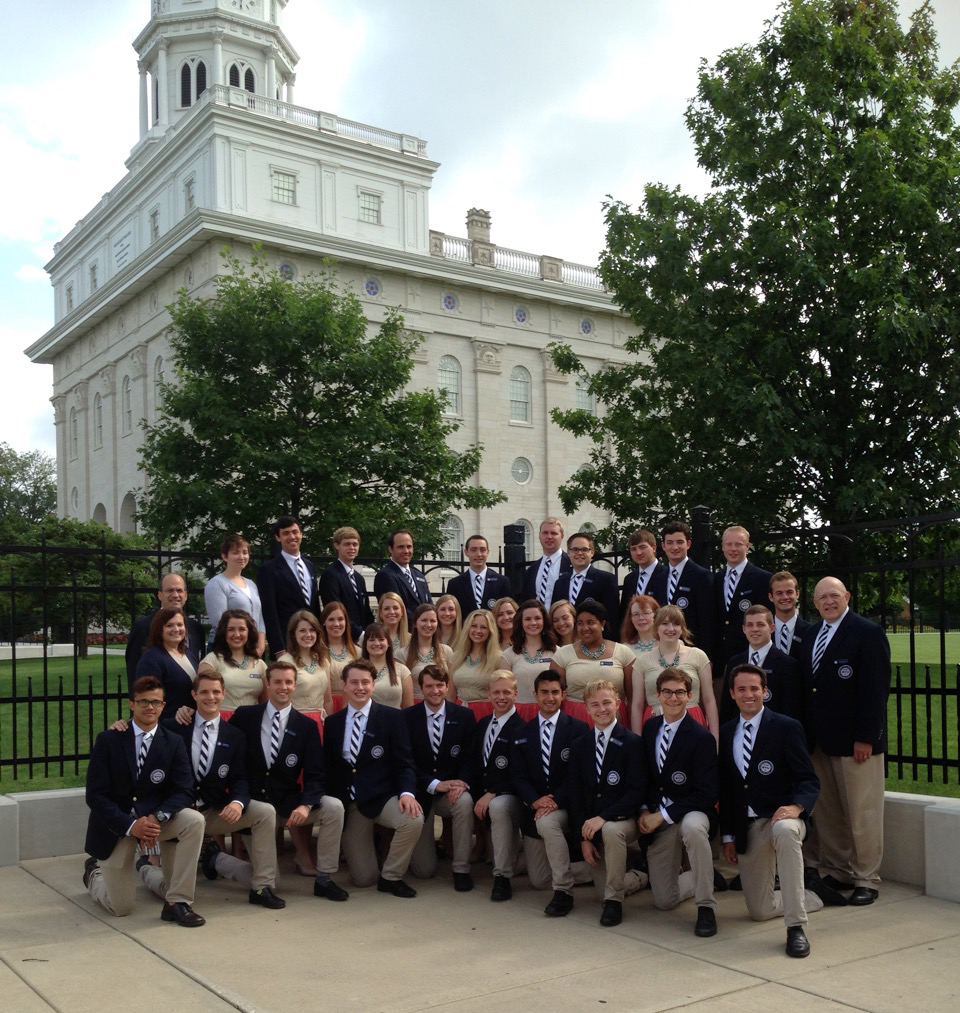 Nauvoo Temple visits were a favorite activity for the company in Nauvoo. 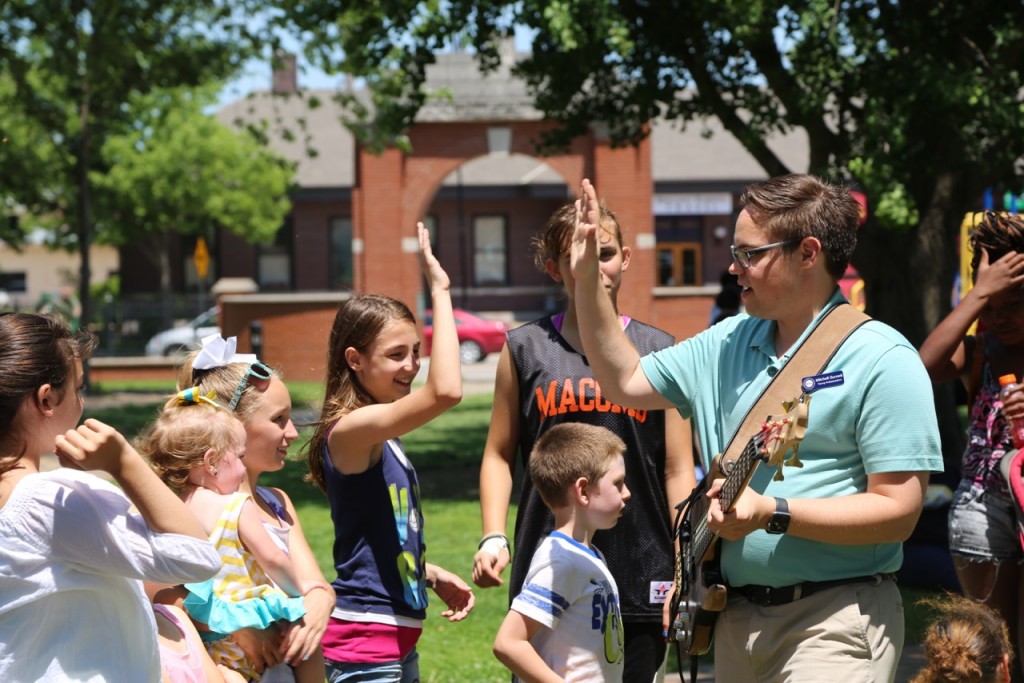 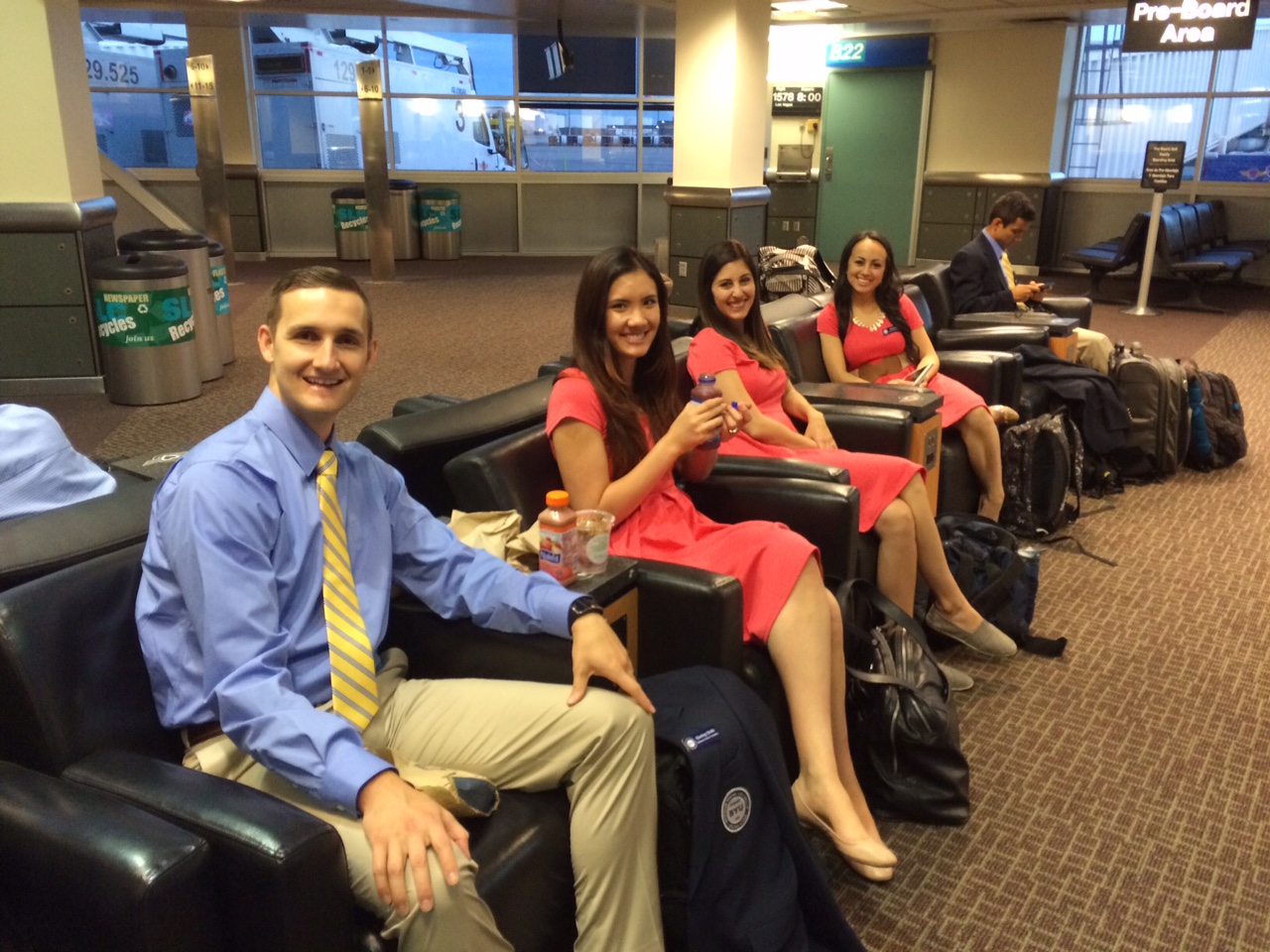