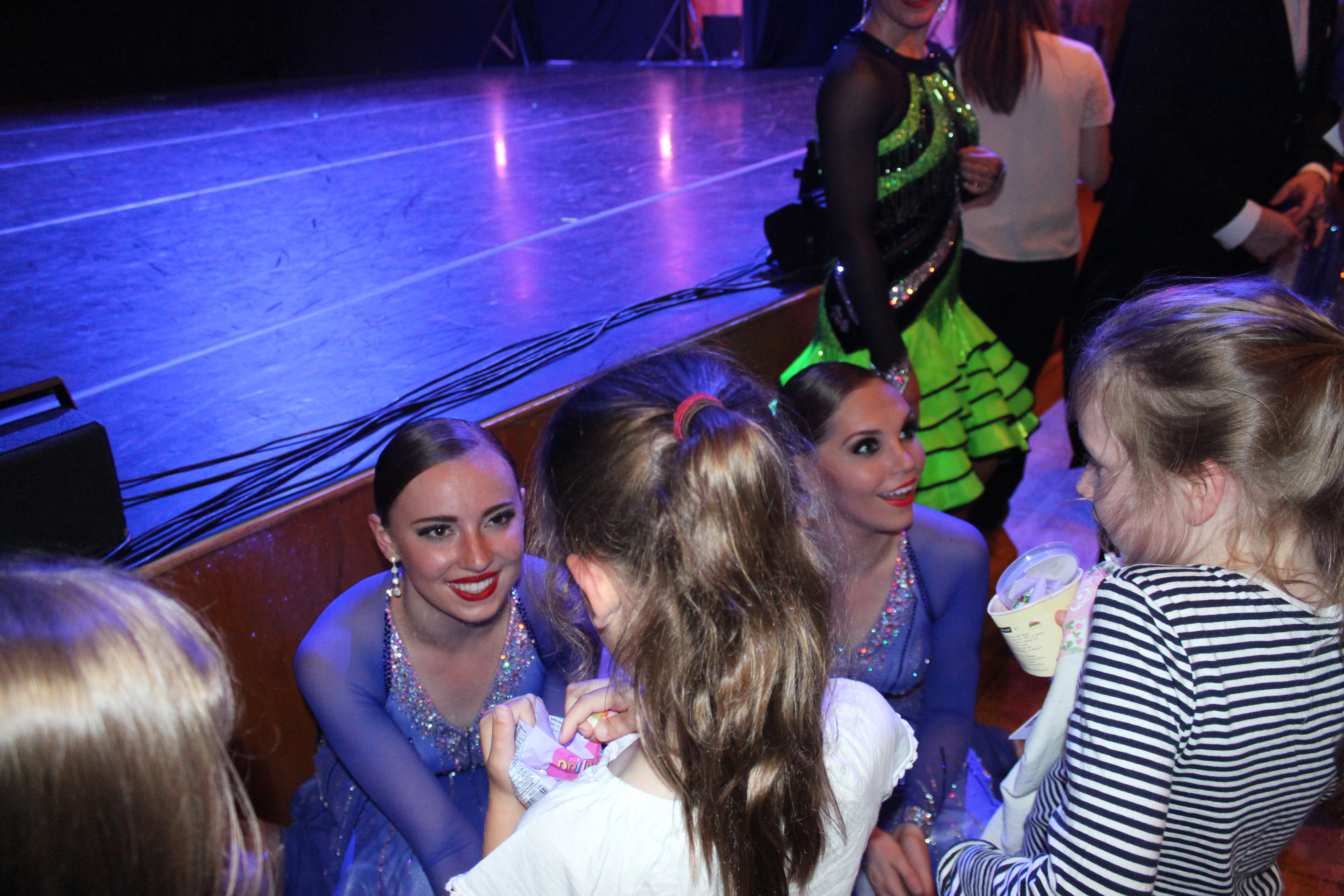 The BYU Ballroom Dance Company wrapped up its final week of tour with a sold-out performance in London’s Mermaid Theatre. It was a fitting way to end a tour that attracted community members, religious leaders, and VIPs alike, including the Baroness of Winterbourne, the Ambassador of Honduras, and several members of Parliament. Having performed nearly every night for the past two weeks, the group now returns to campus for some well-deserved rest and recovery – proudly returning with their championship trophies from Blackpool. This week the team traveled to Wales and Southern England. Highlights include: <ul> <li>Partnered with the Church of England in a service project called “billion graves.” For this activity, BYU students took over 1,000 photos of deteriorating headstones at a local Anglican Church in order to collect and preserve the records of persons buried there.</li> <li>Performed in cities where several members of the group trace their family history from: Leicester, Cardiff, Bath, Cambridge, and London.</li> <li>Raised funds in 11 of the 12 performances to donate to local charities. This week, one of the beneficiaries was the Velindre Cancer Centre in Cardiff, Wales. Prior to the performance, members of the team were able to visit the Centre, where they danced and interacted with patients.</li> <li>Visited two of the most ancient historical sites in England: the Roman Baths (which date back to 60-70 AD) and Stonehenge (constructed from 3000 BC to 2000 BC).</li> </ul> 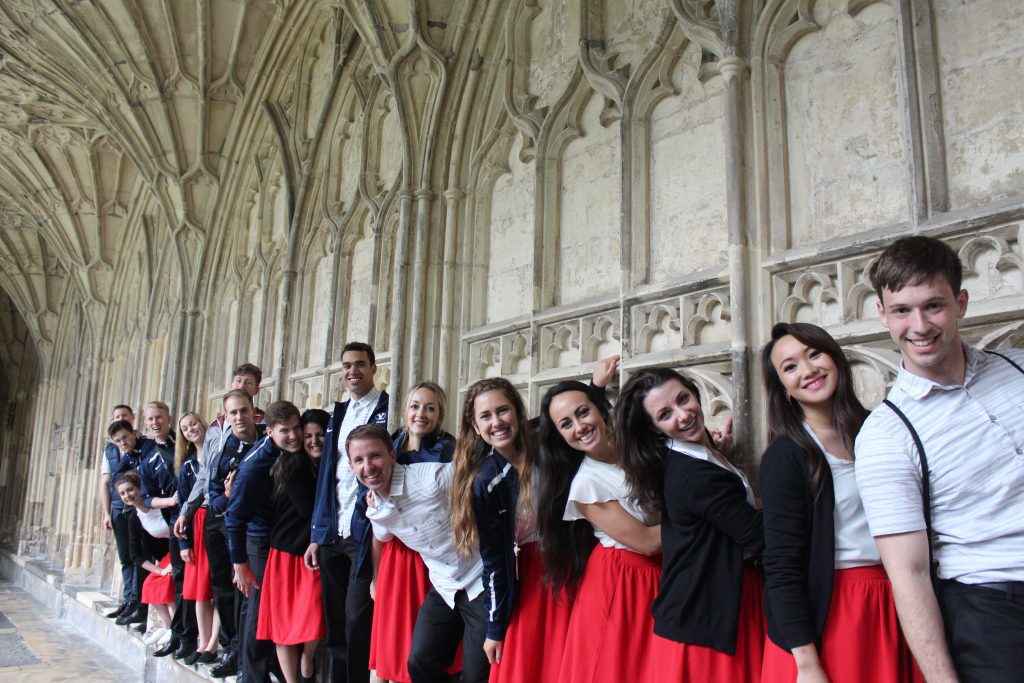 Members of the Ballroom group enjoy touring Gloucester Cathedral, a site that was also used in the Harry Potter films. 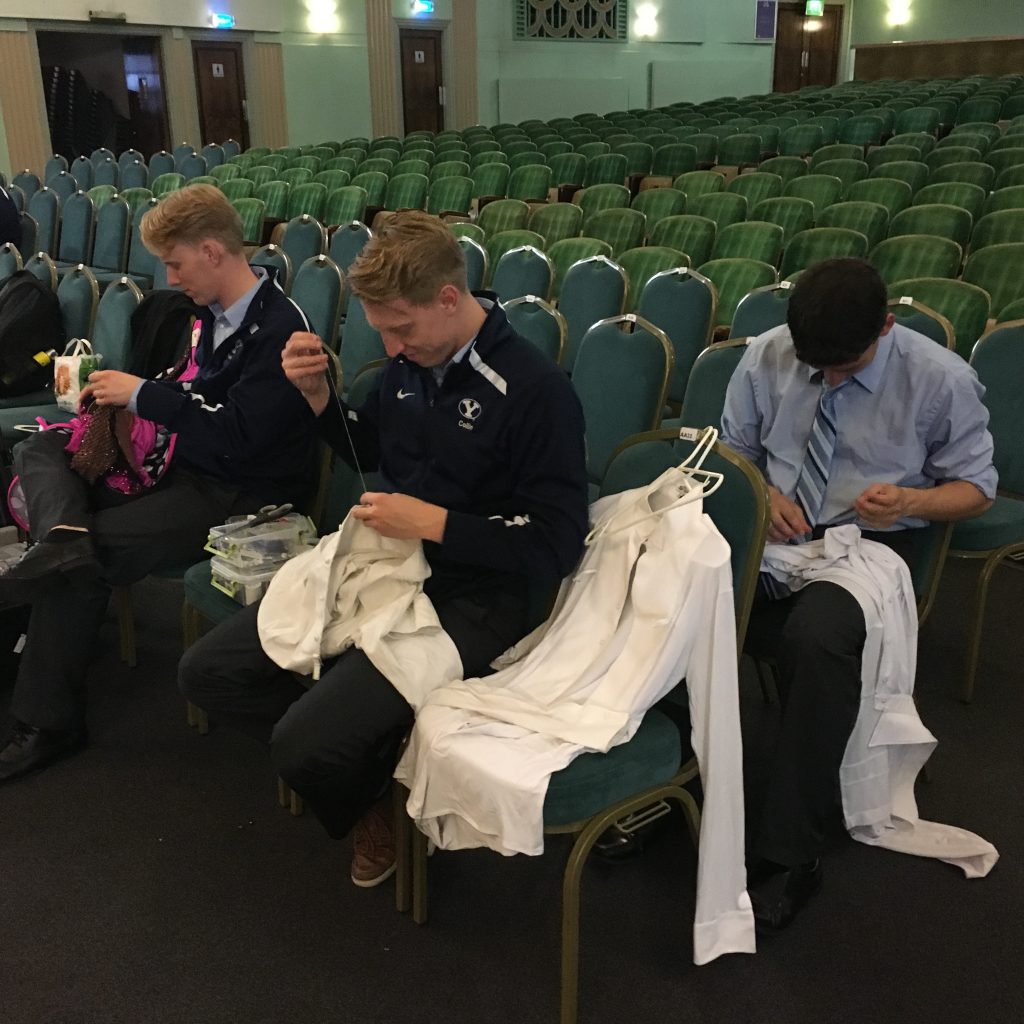 Three members of the Ballroom team (left to right, Robbie Cromwell, Collin Williams, and Adam Lee) put their sewing skills to the test in order to maintain their costumes on tour. 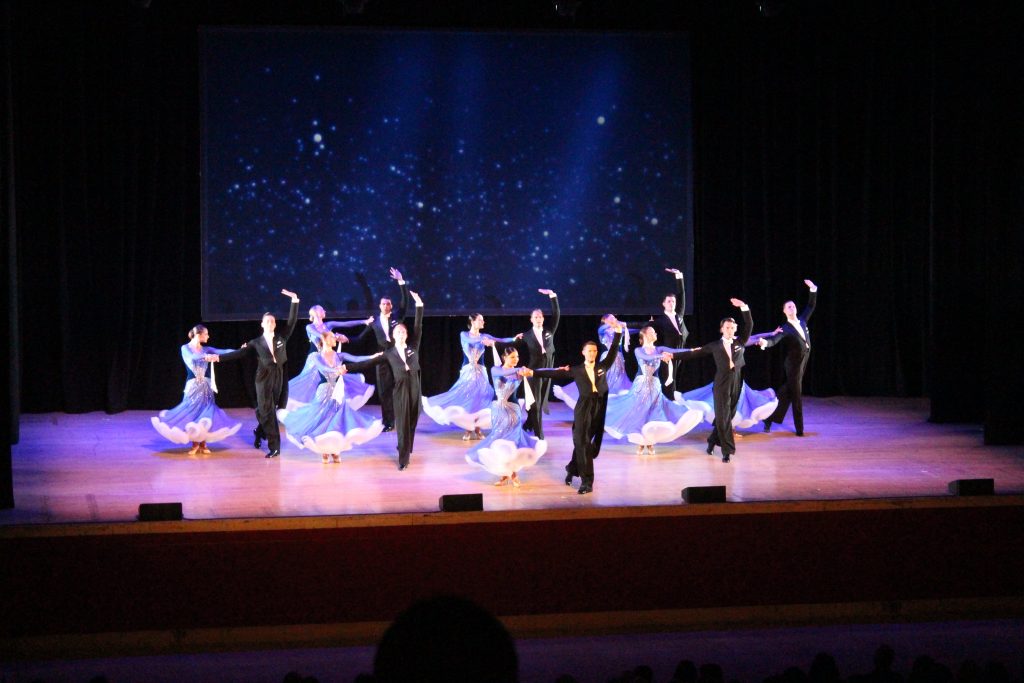 The Ballroom Dance Company strikes a pose during their performance in Bath, England. 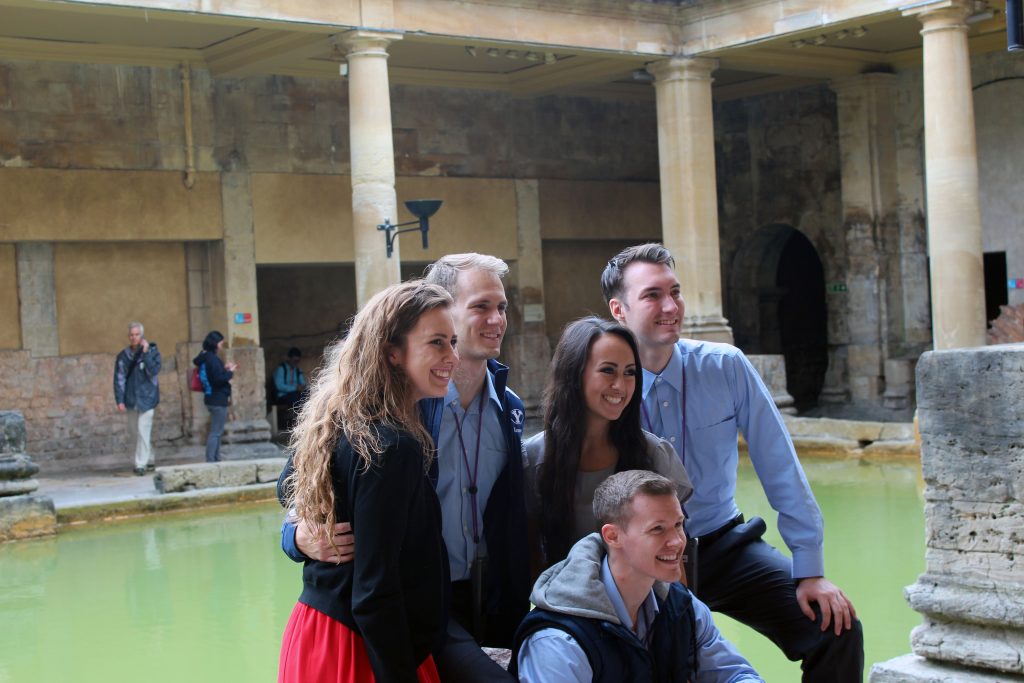 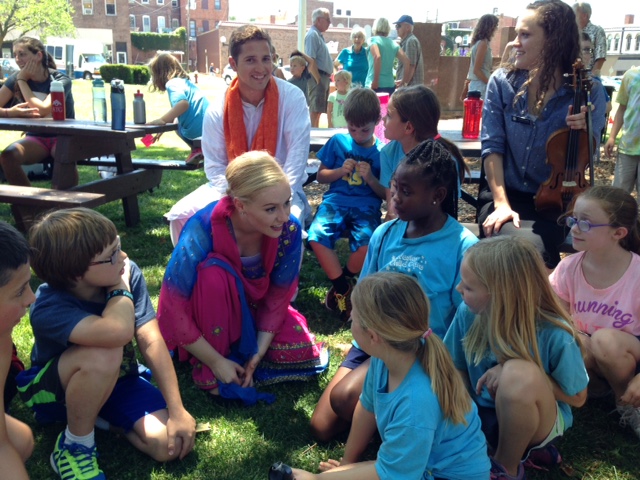 After completing their second week of performing and outreach opportunities in Nauvoo and outlying towns, the International Folk Dance Ensemble traveled to Milwaukee, where they had the opportunity to perform a choreographic MFA thesis dance work by Jeanette Geslison at the University of Wisconsin-Milwaukee.  The group performed at the majestic Bader Concert Hall on the UWM campus in front of dance professors, dance graduate students, friends, and family. Many of the audience members returned the next night when the ensemble performed at the Peck Pavilion at the Marcus Center for the Performing Arts, a covered outdoor venue located by the downtown Milwaukee River Walk.  They performed the last tour show for a sold-out crowd, and had a particularly enthusiastic response from the local folk dance community. Highlights of the week include: <ul> <li>Performing the final show on the Nauvoo outdoor stage for over 1,000 enthusiastic audience members.</li> <li>Cleaning the Carl Sandburg Auditorium in Carthage as a service project following a well-received outreach performance.</li> <li>Visiting Carthage Jail, after which the ensemble’s musicians played hymns just outside the jail, as many visitors solemnly stopped and listened.</li> <li>Presenting an outreach performance in Macomb, which drew many enthusiastic audience members, including an entire children’s day care school. After the performance the children crowded around the dancers for a “kicking the hat off the stick” contest. Dancer Cameron King and two musicians also initiated a fun clogging lesson and dance party.</li> <li>Dancing in a workshop in Milwaukee with the Sumadija Serbian Dance Ensemble and members of the Polish, Ukrainian, and Caledonian dance ensembles.</li> </ul> 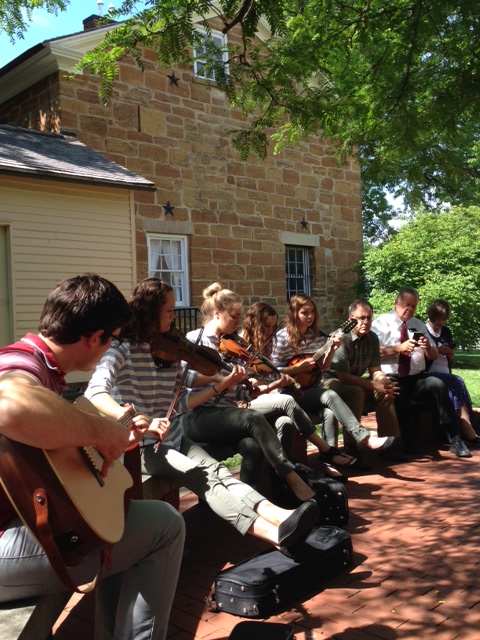 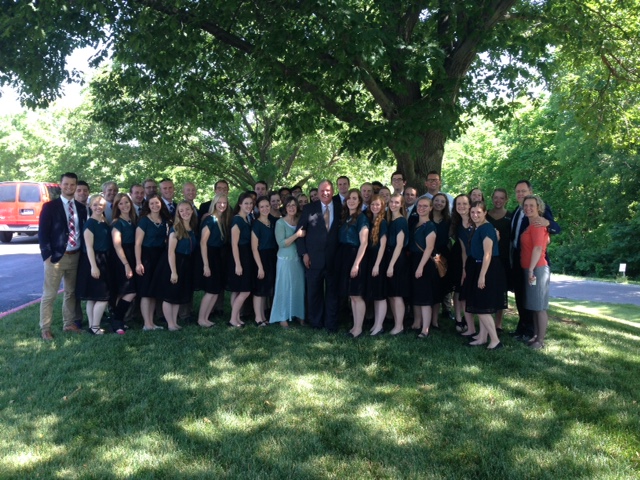 Folk Dance Ensemble poses for a photo with the Public Affairs missionaries, Elder and Sister Porter, before leaving Nauvoo.

BYU Folk Dancers participated in a workshop with the Sumadija Serbian Dance Ensemble in Milwaukee. 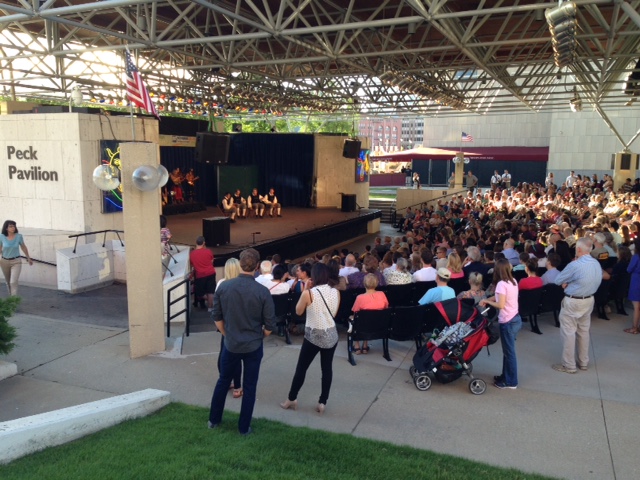 The Folk Dancers' final performance was given at the Peck Pavilion in Milwaukee.

This week, the nine-woman a cappella group Noteworthy left for Nauvoo, Illinois, where they will perform as the site's featured entertainment for the next two weeks. Noteworthy, in only its second season as an official BYU performing group, will be visiting Nauvoo and nearby cities from June 20 to July 3. The groups' diverse selection of music repertoire will allow for a customized performance every night, allowing return-audience members to enjoy a fresh show each time they attend. “Nauvoo will give us more opportunities to perform in one location,” says Janae Klumpp, a retiring Noteworthy member in her third year with the group. “Typically we spend most of our time traveling; we quickly set up and perform, and then we have to leave. But this time we’ll have more opportunities to perform and interact with people.” 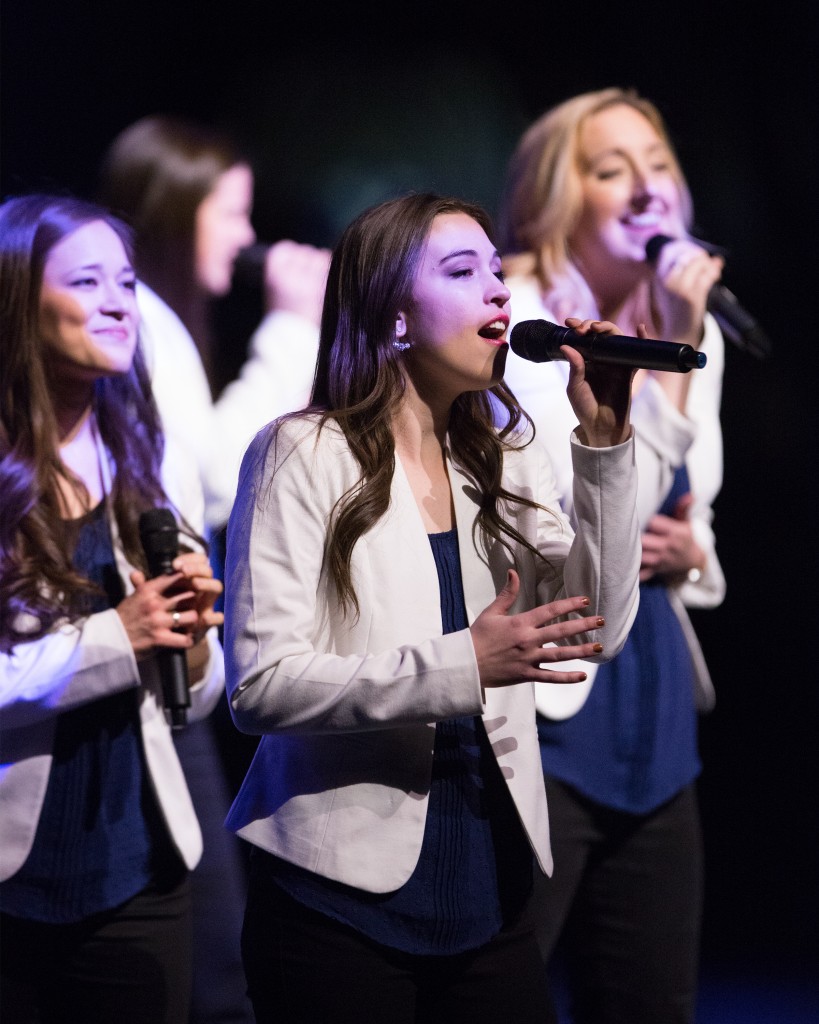