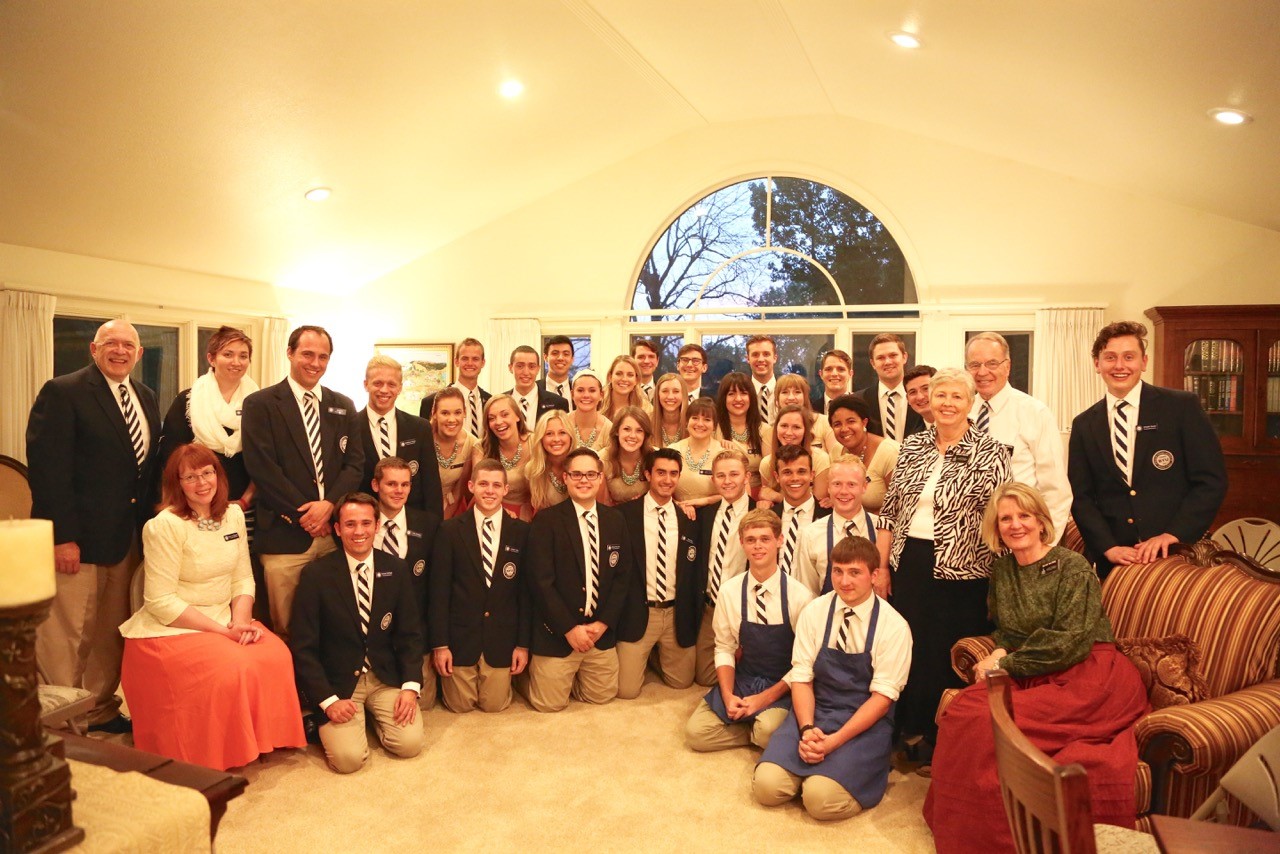 The Young Ambassadors’ Nauvoo experience started Monday, June 1<sup>st</sup>, at 4 a.m. in the Richards Building parking lot where they met to depart.  The group eventually arrived at their home for the next two weeks--Nauvoo Villas, where David and JoAnna Miller and their family have provided lodging and lovingly prepared and delivered lunches and dinners for the group all week long. The Young Ambassadors caught sight of the beautiful Nauvoo Temple as they drove to the mission home where President and Sister Gibbons (Nauvoo Mission President), Sister Watkins (Public Affairs Missionary) and her companion, Sister Brown (Mission Secretary) welcomed them to Nauvoo with homemade cookies, ice cream and words of welcome.  As they drove past the beautifully lit temple on the way home, they looked forward with anticipation to the next morning when they would be able to enter the Lord’s House for baptisms and endowment sessions. The student technicians, and Young Ambassadors Technical Director, John Shurtleff, are so organized in their efforts that the group has been able to set up for each evening performance in just one half hour each night after the regular performance by the Nauvoo Brass Band, Young Performing Missionaries and Couple Missionaries. The weather has been beautiful.  The entire week they were blessed with very few insects, negligible humidity and no rain.  The Young Ambassadors were able to perform every scheduled performance to appreciative audiences, including busloads of youth conference participants, without any challenges from the weather. In Historic Nauvoo the group received a very informative and inspiring tour of the Martyrdom Trail with Craig Dunn.  There is no one better prepared through his personal research and writing to give the Young Ambassadors all of the details of the days leading up to Joseph Smith’s Martyrdom than Brother Dunn.  The insights that he shared were illuminating and had a profound impact on all of their testimonies of the Prophet Joseph Smith. <h6>The Young Ambassadors were able to perform every scheduled performance to appreciative audiences, including busloads of youth conference participants, without any challenges from the weather.</h6> The group has also enjoyed wagon and carriage rides through old Nauvoo, and a visit to the Carthage Jail, where they were able to sing three songs in the martyrdom room.  Jack Shapiro sang a beautiful rendition of “A Poor Wayfaring Man of Grief,” followed by the entire group singing “Praise to the Man” and “God Be With You”.  The spirit was strong as Elder Larson bore solemn testimony of the prophet.  Before leaving Carthage they were inspired by the Nauvoo Brass Band who presented a concert outside Carthage Jail with a program of Hymns of the Restoration entitled “Carthage Hymnfest”.  Their beautiful playing, and lovely settings of so many beloved church hymns made that quiet afternoon under the trees, something to be remembered for a lifetime. Friday started early with a long drive to Springfield, Illinois and a visit to the Abraham Lincoln Presidential Library and Museum.  This spectacular museum is a remarkable tribute to our 16<sup>th</sup> President of the United States.  Their performance in the rotunda of the Museum included a beautiful a cappella arrangement of the "Star Spangled Banner."  Driving back to Nauvoo, the rains poured down and they were worried about that evening’s show.  However, when they pulled into Nauvoo, there had been no rain there, and the show that evening went like clockwork. Saturday found the group dressed in bright yellow “Helping Hands” t-shirts, working side by side with 150 Nauvoo Stake members in a city-wide clean up project.  It was fun to join with the saints in making Hannibal more beautiful.  The Young Ambassadors enjoyed presenting a short concert in the City Park where Mayor Hark presented Young Ambassadors president, Tanner DeWaal, with a key to the city of Hannibal. Every night this week, the Young Ambassadors have been introduced in Old Nauvoo by Elder Harry Schultz, who is serving a mission with his wife, Nancy.  Harry directed the Young Ambassadors in the early 70s where he met his wife in the group.  It has been an honor to be introduced each night by one who had such an impact in our group’s beginnings.  Only one week left in Beautiful Nauvoo! 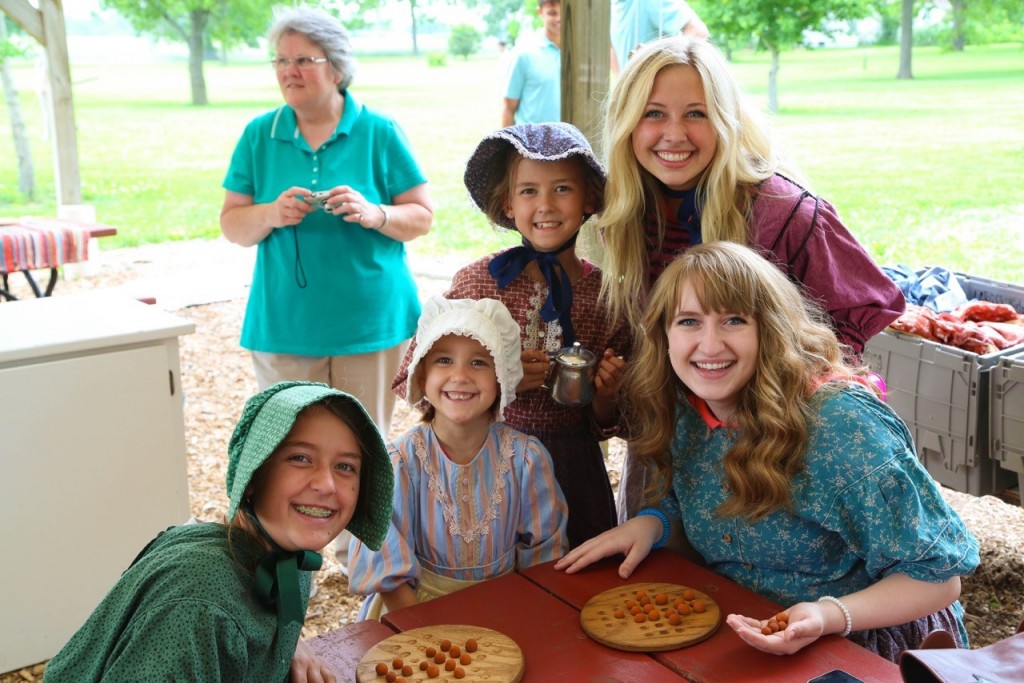 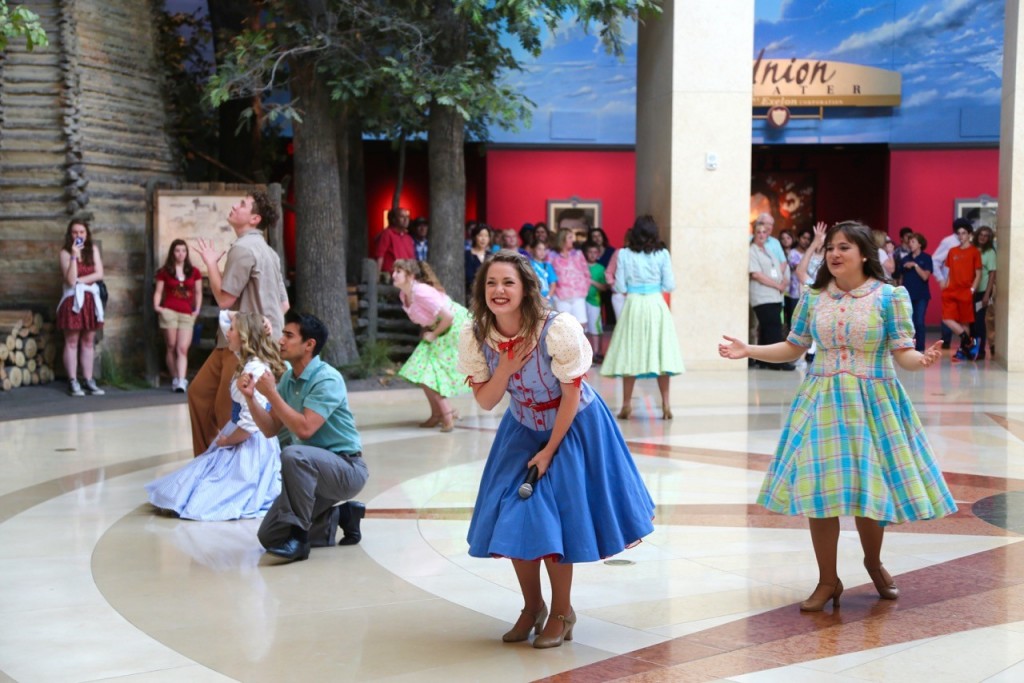 Cassie Green (center) sings out "Can't Help Falling In Love" at an outreach performance at the Abraham Lincoln Presidential Museum. 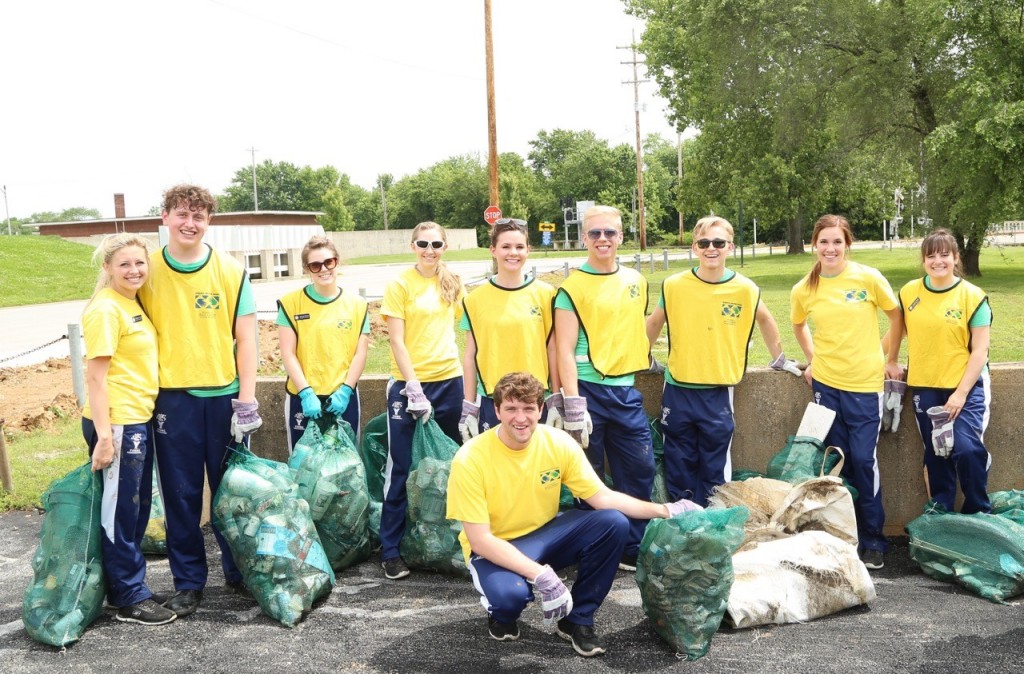 Joining with another 150 people, the Young Ambassadors cleaned up designated areas in the city of Hannibal. 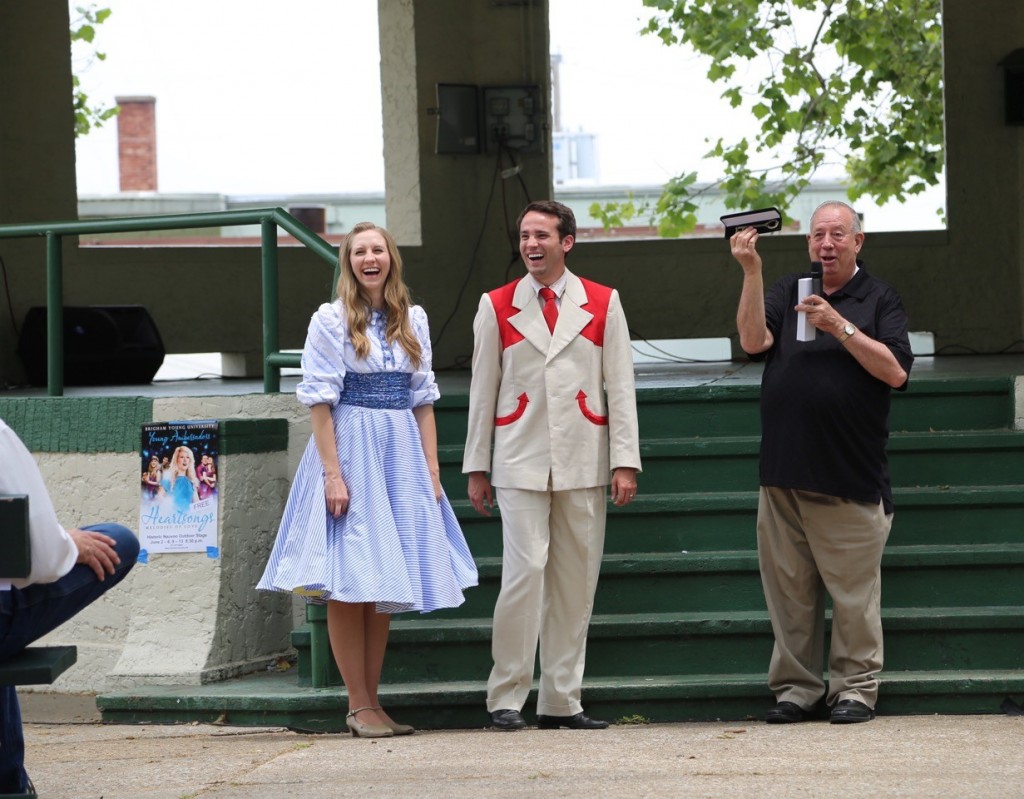 Young Ambassadors Tanner DeWaal and Megan Sackett accept a key to the City of Hannibal from Mayor Hark before an outreach concert in the park.